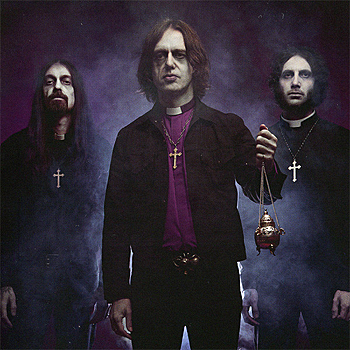 With the Dead
Category: Doom Metal
Album: With the Dead
Stars: 4
Blurb: Crafted from a trio of hardened veterans of the genre, the debut from With the Dead is an archetypical and anguished album that virtually defines doom metal.

Following his second departure from stoner metal band Electric Wizard, drummer Mark Anthony Greening and his on-and-off-again band mate Tim Bagshaw hooked up with former Napalm Death vocalist Lee Dorian, forming With the Dead on Halloween, 2014. Now, Greening has left the group, but not before spending nearly two years with the band to create this self-titled debut that may be one of the genre’s most definitive records. Virtually every element of With the Dead is finely crafted to deliver a darkly rich experience – from Greening’s powerful and precise percussion, to Bagshaw’s monstrous and monolithic bass and guitar riffs, topped off by Dorian’s harrowing, haunting howl. And yet, amid the marching juggernaut of distortion and despair is a melodic and complex musicality at work; the kind that only a trio of hardened genre veterans can exhibit. For example, there is a bluesy quality to “I Am Your Virus,” conveyed by way of Dorian’s voice, augmented by a phased guitar accompaniment waxing and waning to create a shrill, steely, but still subtle effect. “Nephthys” flexes its muscles with flowing and sometimes harmonized riffs that are (dare I say) catchy, all the while Dorian’s voice balancing a soaring melody with almost atonal bellows, which contrasts with the chanting cries of “Living with the Dead,” the song’s title repeated to an almost ritualistic degree that meshes well with the menace of the drums and guitars, steadily insinuating themselves into the listener’s psyche. With doom metal having undergone so many permutations over the years, it’s refreshing to hear With the Dead going for an archetypical approach that recalls the genre’s influences and earliest sonic incarnations – if one were to take the blues-laden bombast of Black Sabbath and stir the apocalyptic rage of Godflesh into the cauldron, the noxious potion of heaviness and hopelessness would undoubtedly sound like With the Dead. This is a band with a great deal of history behind it, and it can be heard in every anguished note and every tormented drumbeat.