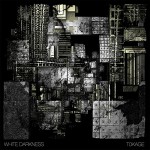 Considering the breadth of Jason Köhnen’s output, it should come as no surprise that his solo project, White Darkness, is no less musically divergent or experimental. Far from the frantic beat arrangements and spastic breakcore displays of Bong Ra or the deathly jazz excursions of The Kilimanjaro Darkjazz Ensemble, the music on Tokage – if it can indeed be called such – takes a much darker, more sinisterly atmospheric approach. As his second release as White Darkness, Tokage presents a singular challenge in distinguishing itself from its 2007 predecessor, Nothing, for while dark ambient experiments of this type often yield much to behold in sonic variety, they too often fall into monotony and disinterest as works of music or even sound. Seemingly aware of this, Köhnen opts for a more streamlined sound that remains obscurely musical, but tighter in terms of arrangement and progression.

Case in point, the track “hHi|d4Ee” begins with a repeating phrase that may be sampled from an orchestral horn section, set to a disjointed series of drums that hint of Köhnen’s jazzier work. The steely sequences of cymbals accompany as a harmonic variant to the beats while an atonal piano rises among the clouds of malevolent ambience, making the track very soundtrack-like in its character, although its near eight minute length might make for an oppressive listen. As well, “messe][noir” begins in a similar vein with a slow procession of drums, scathing guitar feedback, and a breathy synthetic chorale repeating a dark melodic phrase that descends into hollow silence to offer brief respite before returning to the sonic abyss.

But before you go thinking that Köhnen has simply crafted a mélange of dark sound and dismal noise with only vague hints of musicality, there is “RMNNTs,” which incorporates loops of string swells and twinkling keyboards that create a subtly orchestral backdrop. An organ enters, along with a minor distorted piano and flutters of cello underscored by subtle feedback, making for a sweet melodic climax reminiscent of Mogwai’s noisier moments. The 10-and-a-half minutes if “You are the Interactive Data Mutant.sHIVER/sHIVER//sHIVER///” could easily be the most daunting if not for the passages of tuneful pianos amid the sullen bass strings and eerie wisps of ghostly voices fading in and out of the atmosphere, once again instilling the sense of a horrific soundtrack to a nightmarish journey. “The Volume of the Enclosure” closes the album out on a decidedly gritty note as the overdriven sounds of drums scatter the sonic landscape, reverberating shrieks eventually leading into a slight progression of harmonic feedback that finally fades into an explosively decrepit coda.

Hecate’s Rachael Kozak once again provides vocals, including a few spoken word sequences such as in “FF0000 Rituals,” in her signature monstrous rasp. Tokage is just as inaccessibly experimental as Nothing was, yet still manages to infuse the slightest hints of musical foundation, as if to provide a tether to keep the listener from falling too far into the aural chasm. Of course, this tether threatens to and often does snap at any moment, allowing Köhnen to freely explore the realms of dark sound and ambient ferocity. For fans of this type of sonic experimentation, Tokage is perfect for a truly deep listen that is sure to inflict just a touch of psychological upset.