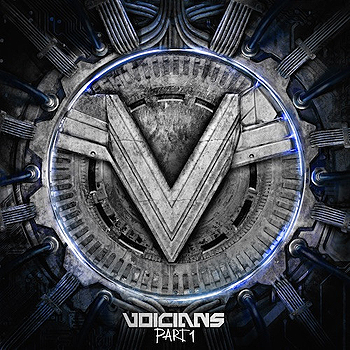 Hailing from Stuttgart, Germany, Daniel Voicians has over the course of the last decade built up a sizable reputation as a prominent remixer and producer, primarily known for his association with independent imprint FiXT. While his 2008 debut release escApe showcased his production skills and musicianship further, his songwriting left something to be desired, lacking in any sense of melodic or vocal mastery. Having had several releases since then, with this debut release as a fulltime FiXT artist, Voicians exhibits a dramatic creative growth spurt with an album of hybridized rock and EDM that is as gripping in its melodic sensibilities as it is dynamic in its stylistic breadth.

Taking the reigns as vocalist immediately proves to be a good move as his breathy and harmoniously emotive range comes into full swing from the onset as “Alive” simply oozes with passion and energy, the subtle juxtaposition of electronic scratching and glitch-laden guitar with synthesized arpeggios that dance around the forceful beats making for an explosive and dramatic opener. The Magic Puppet remix appears later on the album, amplifying the tempo and underscoring the same melody with an alternate bass line to achieve a subliminally more sensual effect than the parent version. The same can be said for songs like “So Clear” and “Show Me the Way” with their rapid-fire guitar riffs and drum & bass breaks, along with the latter track’s blend of darkly guttural verses with the crooning chorus indicating that Voicians may have learned a few things about composition from FiXT guru Celldweller. And then there is “This Pain Feels Real,” a song filled with the sullen urgency of any alt. rock radio hit, given a much tighter arrangement of sound and ambience than the version that originally appeared on Voicians’ A Matter of Time album. But it is with “Empire” that this album begins to take full advantage of its booming production stylings, the synth hook recalling Europe’s “The Final Countdown;” given the anthemic atmosphere, such connotations only serve to enhance the song’s appeal, along with its disco beat. Conversely, the acoustic version that concludes the album with its somber piano and orchestral flourishes somehow renders the song much more inert in its emotional impact, though not for lack of a worthwhile attempt.

As was always the case, Voicians is an excellent producer, blending elements of rock and electro/EDM with a bombastic and cinematic flair, but with Voicians (Part 1), he comes into his own as a songwriter and delivers an album that is sure to earn more than a few repeat listens. Each melodic hook – whether deliver via synth, vocal, or guitar – hits the right marks, beckoning the listener to sing or hum along, all the while instilling images as vibrant as the finely crafted sounds blasting through the speakers. In fact, this ironically reveals the album’s main weakness as each song is so packed with this vibrancy that even quieter moments become almost overwhelming, and while the album is thankfully just under 35 minutes, it’s still a tremendous amount of audio stimuli to ingest. Nevertheless, Voicians (Part 1) is still many steps above escApe and signals the artist as a powerful entry to the FiXT creative roster.