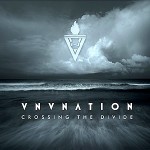 Crossing the Divide was announced on the back of the release of Of Faith, Power, and Glory almost three years ago and although it was supposed to see the light of day back in June of 2010, it was only recently made available free of charge via SoundCloud. Without as much as an announcement on VNV Nation’s official website for months and months, it seemed that this EP might have been condemned to obscurity. While it is far from abominable, it is also in possession of no qualities that would make it particularly memorable, inventive, or vital to band’s already rich catalog.

What’s a clear and undeniable advantage is the fact that the material remixed on this EP originates from a better of the two albums released in the last few years by the duo of Ronan Harris and Mark Jackson. Six remixes rework four, arguably, of the strongest songs from Of Faith, Power, and Glory that was generally livelier and more varied than the subsequent Automatic. Despite being headlined by a talented and recognized group of artists, Crossing the Divide still belongs to its initiators and composers. The identity of VNV Nation is so strongly imprinted upon the unmistakable delivery of lyrics that they become a spine of this EP to the same extent that they are on any of band’s original releases. Although the beats surrounding it change, this is all essentially driven by one and the same familiar voice. Nowhere is it more evident than on Nomenklatür’s ambient take on “Ghosts.” Filled with mellow, chilled out melody lines that comprise a perfect background for the delivery of lyrics, this track points to this evident fault that then begins to plague the entire EP. When juxtaposed with Daniel Myer’s remix of the same song, this issue becomes even more apparent. At first, a sparse, inoffensive use of sound effectively highlights the vocal work that in turn renders the entire track haunting and atmospheric. As if it was made of two halves, however, Myer’s “Ghosts” bursts into drum & bass fidelity that does little more than lead into further vocal parts and destroys the well conveyed mood of the opening parts. “Where There Is Light” by Rotersand carries clear staples of their unique method but is by far the most generic element of the whole album. By contrast, Jae Puget of AFI attempts to lift the entire structure of “Sentinel” and establish it within a lively acoustic composition that demonstrates the pinnacle of originality even if it doesn’t outdo its master copy. Leæther Strip’s input in any form, whether that would be Craig Larsen’s own work or redoing of the existing material, is always welcome and his remix of “Tomorrow Never Comes” is repetitious, yes, but also memorable and emotional. Strangely, even he can’t overcome the fact that his music serves the purpose of laying a background for Ronan Harris’ distinct outcries and that all remixes are clearly incapable of violating the set structure of given songs.

For completists of VNV Nation’s remix oeuvre, Crossing the Divide is a solid, even inspired effort. The range of directions in which the original material was pushed and challenged is impressive, but each subsequent track ultimately only serves to highlight the quality of Harris’ and Jackson’s work without carving a niche for this EP in the depths of your music library. It’s a one-off listen that you will most likely shrug off only to return to the source – VNV Nation’s original and strong Of Faith, Power, and Glory.