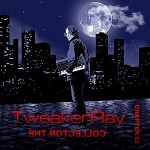 Having earned himself a formidable reputation as a remix artist and producer, TweakerRay now puts his skills to the test with a full-length debut that plunges the listener into a futuristic dystopia that explores various electronic forms. The concept behind The Collector seems simple enough: in an unspecified future society, the Royal Audio Supremacy controls the masses through the regulation of music, having “rid our society of the outrageous producers and musicians who poised our ears and minds with dissonance,” with a new underground rebellion threatening to undermine the system. As the album presents the second chapter, the first being a three-track EP that simply introduces the sonic landscape in which this world exists, the story is propelled by TweakerRay’s diverse style that ranges from glitch-laden and danceable electro/rock on such tracks as “Electronic Beast” and “Fight Back,” to scorching dubstep on “Toxic Wasteland,” to drum & bass on “The Hunting,” to the melancholy ballad of lush vocoder and piano on “Broken Dreams.” Throughout the album, there is a distinctly cinematic flair befitting the storyline that drives it, best exemplified in the title tracks of “The Collector I” and “The Collector II,” the latter moving at a deliberate pace, topped off by twinkling pianos, squelching distorted synths, and a bouncy bass line that threatens to pick up speed and thrust into a chaos that never comes, while the first part marches with an industrialized rock bombast that is at once unsettling in its atmosphere, soothing in its dark melody. The most overt references to the album’s storyline come not in the lyrics, but in tracks like “Intro,” “Status Report Sgt. Q,” and “Transmission,” all of which feature dialogue that, while intrinsic to the concept, almost serves as an augment to the overall ambience; a starting point, if you will, whereby the listener is then allowed to determine the course of events as he/she hears fit. It’s an interesting approach that extends from the first chapter, on which TweakerRay – according to the commentary tracks on the CD-Rom features – apparently allowed the listeners to give their own explanations as to what happened on that first EP.

Oh yes, the commentary tracks; already not content to present a linear narrative in the music, TweakerRay gives you more bang for your buck as The Collector – Chapter 02 comes in a special limited edition as a CD-Rom equipped with a plethora of bonus material, not the least of which being the commentary tracks on which the artist details his production and writing process. Limited to 500 copies, also included in the deluxe version is an extended booklet that helps to draw out the storyline, as well as a collection of demos and alternate instrumentals, all of which help to demonstrate TweakerRay’s proficiency with production and composition. The deluxe edition of the album can be purchased directly from the TweakerRay and FiXT websites, while the standard editions are available via Amazon and iTunes.

Having co-written and produced Hanin Elias’ FutureNoir album, The Collector almost feels like a spiritual successor in TweakerRay’s predilection for futuristic tones, though the story is sure to elicit comparisons to the likes of Fear Factory’s Obsolete or even Queensrÿche’s Operation: Mindcrime. If nothing else, the album is enjoyable and exhibits an artist who puts forth a great deal of audio craftsmanship, well worth repeated listening. Given the ambiguous ending of “Transmission,” with the supposed hero apparently on the run from the policing forces, it will be interesting to see in what direction Chapter 03 will take, and given the scope and varied sounds present on The Collector – Chapter 02, what new sounds TweakerRay will be presenting.