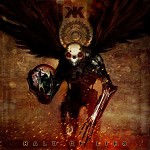 TraKKtor
Category: EBM
Album: Halo of Lies
Stars: 4
Blurb: This Swedish trio takes its dynamic EBM sound into new, more expansive realms and may just have discovered the next stage of EBM in the process!

It might seem as if the Swedish trio of Jens, Pierre, and Robert – a.k.a. TraKKtor – took their name from the Combichrist song of the same name, but given that their formation in 2001 predated it by a good two years, that clearly isn’t the case. For all that, it’s a most un-EBM sounding name; it does, however, possess a certain down-to-earth charm that, judging by the humorous tone of the act’s website, may well have been a major factor in them choosing it!

The preceding album, Force Majeure, from 2011 was an excellent example of muscular, infectious EBM with a dramatic edge and it’s this side that the band has developed on this latest double album, which sees the trio scaling new heights in terms of power and drama. In doing so, TraKKtor may just have discovered the next stage in the evolution of EBM! Virtually every track has a strong thematic quality that elevates them from mere club concerns (although the second disc of remixes might have been included with such concerns in mind) and makes for a listening experience that is exciting, enthralling, and compulsive as the expectation gathers with every track as to what heights will be scaled next.

It’s perhaps no real surprise that these facets are evident during the instrumental tracks “Welcome to Sin City,” which could easily be the theme to some blockbuster movie, and “Orbital Strike,” which, somewhat bizarrely, has an almost medieval feel to it. However, the manner in which the trio mixes these elements with their exciting electro styles is what makes this the success it is. While “End of Days” continues where the previous album left off with a strong, instantly memorable theme, it acts as a springboard for the uncharted areas that the album explores hereafter, with “Blitzkrieg Galaxy” leaping from the speakers with a multilayered sonic tapestry that oozes with purposeful intensity. The symphonic cavalcades that color “Halo of Lies” enhance the abrupt change of moods that the track undergoes between the verses and the chorus; a trick that pays off throughout and enhances the already considerably dramatic potential of such tracks as “Spitting On Your Grave,” which is heralded by a fearsome roar and alternates between the bombastic industrial maelstrom of the verses and a soaring melodic chorus, and the penultimate “Drag Me to Hell” as it similarly works with differing tempos that never sound jarring. The band’s old-school influences rear their head again during the self-celebratory “TraKKtor,” although as usual, they take these influences into totally new realms with an action-packed feel being complemented by gritty guitar work and pacing rhythms that make for another stunning number, while the gruff but melodic vocals that contrast the usual harsh style and so provide a touch more character is very much the icing on the cake. All of which leaves the closing “The Dawn of War” to finish the album on a decidedly mournful note, starting off in a similar fashion to Frankie’s Two Tribes with a mix of piano embellished by air raid sirens. It then develops into slow moving and emotive piece that scales new heights of grandeur as it reaches its climax. As such, it’s a fitting end to this superb album that sees TraKKtor expanding its musical boundaries and forging a sound that stands out from the crowd.