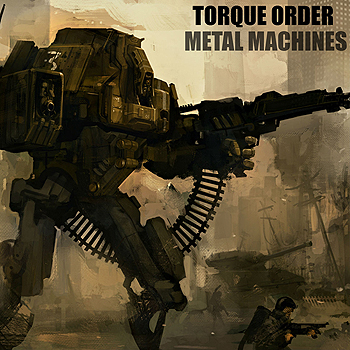 Torque Order
Category: Industrial / Metal
Album: Metal Machines
Stars: 3
Blurb: A blitzkrieg assault of scathing synths and guitars, aggressive vocals, and powerful beats that many a fan of industrial/metal should find quite appealing.

Hailing from Austin, TX and having released the Trust No One debut album in late 2014, Torque Order’s campaign against the banality and repetition of the mainstream proceeds apace with the Metal Machines single. As the disaffected female vocal sample that introduces the song states, “Mechanized, automated, destructive, nothing can defeat these metal machines;” no better description could be given for the band and “Metal Machines” in particular as LoZ roars atop percolating synth rhythms, Jaye Leigh Vincent’s forceful percussive attack, and incendiary guitars provided by Josef Pfost. It’s a martial anthem of uncompromising industrial energy that evokes images of heavily armored mecha unleashing arsenals of unparalleled destructive power on each other, and while it’s a tried and true formula, it’s one that Torque Order wields and harnesses to great effect. Following the title track are six remixes, with Adoration Destroyed leading the charge with a slower paced version that replaces the guitars with fluid, distorted synth lines, building upon a bleak atmosphere that steadily rises in tempo and intensity. Conversely, the DJ 501 remix, while not light on the synths, goes for the jugular with a heavier emphasis on the guitars, making for a decidedly caustic, heavy version that is only let down by the thinness of the drumbeats. Also notable is the Precision Field remix for its groaning metallic drones and pulsating synth accompaniments, taking the song into no less rhythmically concentrated but more darkly atmospheric territory, while the Lonely Road mix by Kounter Mehzure offers a rather unique interpretation full of skittering, almost glitchy electronics and eerie pads, making for a haunting closing track. As stated, Torque Order demonstrates great proficiency with this particular style of industrialized metal, unleashing a blitzkrieg assault of scathing synths and guitars, aggressive vocals, and powerful beats that many should find quite appealing. Hopefully, the band will be able to maintain a prolific and productive pace before audiences become too burnt out by the firestorm Torque Order is steadily becoming known for with each release.