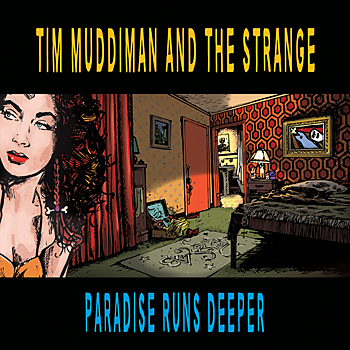 Tim Muddiman and The Strange
Category: Goth / Rock / Grunge
Album: Paradise Runs Deeper
Stars: 3
Blurb: An alternative cup of beer for your ears, the band becomes dark, relaxed, and poetic on this album.

The music from Tim Muddiman and The Strange could be described with the image of a drunk Madonna from the ‘80s walking down streets with a cheap beer in one hand and a dead phone on the other. It has an interesting mix between the attraction of decades past and some sporadic touches from a more contemporary era.

“Bullet Stroke,” the opening track for Paradise Runs Deeper, sounds like an alternative version of the funeral march, giving a good glimpse of the band’s style for newcomers. It works well as an introduction and would have done the same as a first single. However, Tim Muddiman and The Strange shows that the band can also play down-tempo, relaxing music with highly ‘80s inspired melodies. The sound then becomes more solid and specific, a dark, minimal form of audio poetry for each track. The band becomes wilder and darker with “Hands & Claws” and “Wildwood House,” which some could find similar to a form of modern alt./rock, before changing to a more futuristic, minimal sound. Direct lyrics, raw and draft-like, seem to be the trend, a personal mark newcomers won’t get used to very easily, but could sound great for those who are fans already. Some of the tracks of Paradise Runs Deeper last longer than they should, which doesn’t really contribute anything more to the album. The sound is interesting enough to keep the listener’s attention, but not as much as one would expect for an extended time. “Slide Away” would be the favorite to many fans as it mixes in equal parts classical dark atmosphere and alternative rock, similar to Paradise Lost’s Host album, giving a cocktail of strippers, drugs, and beer, all of it wrapped in an alternative scenario with nightlife’s cigarettes. The closing track, “Wildwood Blue Stone,” an acoustic version of “Wildwood Stone,” has an attractive instrumental and makes for a great finale, but nothing more than that; a bittersweet ending for what could have been a better album.

Paradise Runs Deeper is definitely full of ups and downs; a very independent sound born from the old school music our parents used to enjoy. This is hardly surprising given Muddiman’s history as a longtime collaborator of Gary Numan and Pop Will Eat Itself, and while this nostalgia may not the best option for everyone, it is certainly an interesting choice for anyone looking for a new alternative sound in today’s goth/rock scene.