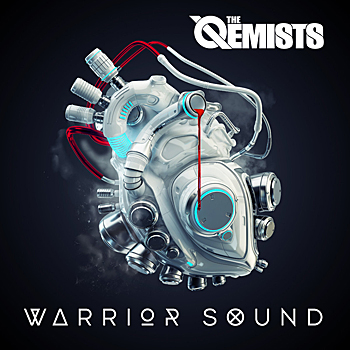 The Qemists
Category: Drum & Bass / Rock
Album: Warrior Sound
Stars: 4
Blurb: An excellent hybrid of the melodic sensibilities of rock & roll and the electronic energy of drum & bass, driven by arresting riffs and anthemic choruses too striking to ignore.

Hailing from Brighton, UK, The Qemists has spent over a decade working through the underground electronic music scene, merging the textures and beats of drum & bass with the songwriting and riff-laden mentality of rock. Heralded by many as successors to the legacy of acts like Pendulum and The Prodigy for this adventurous and engaging blend of styles, the band’s energetic live shows have taken The Qemists throughout the UK, Europe, and Japan. Warrior Sound, the group’s third album showcases a number of changes with not only the addition of vocalists Bruno Balanta and Oliver Simmons, but also signing with Amazing Record Co. in Europe and Celldweller’s own FiXT Music in the USA, ensuring the potential for the wider audience The Qemists deserve.

First and foremost, Warrior Sound is steeped very much in the group’s foundations in electronic music, the guitars and live drums augmenting the synthetic ingredients to create a bombastic, even monolithic sound. For instance, “New Design” seethes with croaks and warbles of synth backed by a dynamic drumbeat that should please any fan of drum & bass, but with the band laying down the live instruments, the song is given an alt./rock sensibility that along with the forceful but melodic vocals of Balanta and Simmons makes for a striking track. The same can be said of tracks like leadoff single “Run You,” the anthemic vocals full of fury and fervor akin to the screaming melodies of Chester Bennington, “Let It Burn” with its rapid fire vocal delivery amid spastic arpeggios and rhythmic guitars, while the catchy harmonies of “Push the Line” complement the shrill klaxon-like synths and infectious chugs of guitar to make for one of the album’s best songs. Similarly, the distorted bass lines move with a fluidic cadence that plays well with the juxtaposition of growled and harmonized vocals, the piano section underscored by clean guitar making for a saccharine interlude that, along with the subtle arrangements of sampled choirs and orchestral strings offset by manic riffs on “Requiem,” does well to showcase the group’s musical chops quite nicely.

Among the fellow warriors aiding The Qemists are rap/metal band Hacktivist, Kenta Koie of Japanese electronic group Crossfaith, Brit-hop MC Ghetts, and Charlie Rhymes, lending their own respective talents to further enhance Warrior Sound’s exploration of rock & roll songwriting with drum & bass production and sensibilities. The record would likely be diminished to being another genre staple if not for the presence of the live element with plenty of poignant lyricism and powerhouse melodies to boot. Though the band may continue to receive comparisons to similarly minded acts of the past, The Qemists offer a contemporary spin on the rock/drum & bass merger that holds the promise for both genres to evolve in new directions… and The Qemists may be just the act to lead that charge; Warrior Sound is the proof!