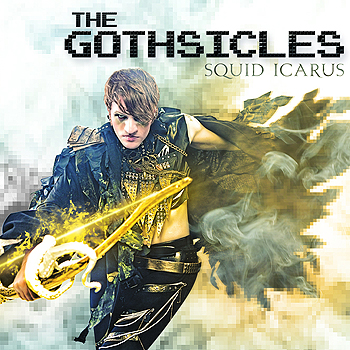 The Gothsicles
Category: EBM / Industrial
Album: Squid Icarus
Stars: 5
Blurb: Probably the defining Gothsicles album, with a wash of great songs and beats from start to finish and more insider secrets than you will ever decipher.

I think about aliens a lot.

But we live far enough in the future to have this… and I think the aliens would love it.

A first look at Squid Icarus, the fourth full-length album by The Gothsicles suggests it’s an exercise in excess. The brilliant cover mash-up melds the design aesthetics of Angelspit and hyperreal photographer Emily Gualdoni to turn Gothsicles lead, Brian Graupner into the videogame superhero he was born to be. And the album is full of pretty seamless integrations, from producers like Assemblage 23, Faderhead, Rotersand, Angelspit, Cyferdyne, Christ Analogue, and Haujobb.

If anything on that list excites you, it’s likely that you will get a lot out of this sound.

The sound itself? The Gothsicles here have crafted exactly what it would sound like if EBM and chiptune got angry naked drunk at a Prodigy concert inside a videogame convention and fucked over the sleeping body of Bob Moog while reading a comic boo… and then kept the baby. But I promise you that somewhere in the middle of the first song, you’ll be glad they did.

And that first song is “Super Scary Action Figure (I Want to Eat Your Brain).” If you aren’t a Gothsicles fan at the start of this, you may be surprised originally by Graupner’s “hold nothing back” vocal delivery, but it’s meant to brutalize your senses and remind you that he means this shit. None of it is just some half-assed casual hobby; this is pure investment, and it’s an immediate rebuke to anyone who insists that electronic music has no soul. In a way, as well, it’s a rebuke to anyone who thinks that these things, the things he sings about powerfully, don’t matter. I’m reminded of a friend who showed me his entire room dedicated to action figures. “It’s not a joke; it’s my life.”

Powered by a high school sitcom sample and a deeply catchy chiptune lead, “Drop Dead, Squid Face!” is a stomping club song that wouldn’t be out of place at a D.A.F. show. In fact, I dare anyone to watch the many YouTube videos of the band performing this track and not walk away feeling the D.A.F. reference strongly, in case we forgot that there was a time in history when stages were wrecked by punk and EBM colliding over analog synths in dirty half-legal clubs.

The third track, “Ultrasweaty” is probably the runaway hit of the album, with a unique (to The Gothsicles) robotic lead chorus and a passionate rhythm that feels like a good bet for just about any dance floor. This is another song that promotes excess, and to sit in the front row of one of the band’s shows and watch the fans dance, it’s clear that the message comes through loudly.

By this point, it should be clear what kind of glove we’re talking about in “I Sniffed the Glove,” even if Cyferdyne infuses the classic Gothsicles sound with blasts of guitar and a second vocal. And the production on “Give Me One More Chance to Get the Hi-Score, Then We Can Go” and “Moon Knight is Cool” lets you forget easily that both are a complete lie. No way is he going after hitting the high score and Moon Knight hasn’t been cool since…

Oh, fuck it! The Warren Ellis Moon Knight has always been cool.

“Chip Replacement Surgery” and “Slime-Half” are both pure chiptune short sonnets that provide a needed break in the constant dance floor throb of the album, while a high point in the album is the cover of Nine Inch Nails’ “Black T-Shirt” from the controversial Strobelight album. Like most great cover songs, you can hear the original in there, swimming hard, hoping to catch up, but in the end, Graupner’s expression of the song hits on all cylinders, both on the album and when performed live.

“Sword Cane” is an elegy to the classy and cultured art of swordcaneage advanced by such experts as Zatoichi, and the heavier, bulky groove of “Cthulhu Fhartwagon” describes perfectly what every artist ever goes through in the tour vehicle.

But nowhere on the album does Graupner reveal his aesthetic as much as on “Bloodlust Software Was Awesome,” an homage to… well, Bloodlust Software, a videogame company that rebelled against the prevalent hyper-serious ultra-violent videogame reigning culture with a tongue-in-cheek sort of cartoon violence that often included killer lawnmowers, cannibalism, transvestite furries, and other absurd adventures into pixelated battle.

Angelspit joins Graupner for “This Club is Closed,” whose classic two-fingered EBM bass line is already a favorite of club managers and bouncers all over. Is it a cheap shot at being played every night? Yes. Will it work? I have no doubt.

The hidden track, “Riding Roller Coasters with Peter Spilles” is another short and ambient track that rounds off the album, reminding us that if you have a chance to talk to the Project Pitchfork vocalist about something dumb, you probably should take it. It’s all roller coasters, death, life, everything.

When the aliens do come, I want to be able to hand them over some amazing music and say, “This is what we do, we humans. We pull together our friends and write catchy songs that are about things that make us smile and we celebrate our fucking lives so hard that we can’t walk anymore. This is how we have Stevie Wonder’s Songs in the Key of Life. This is how we have Paul’s Boutique by the Beastie Boys. This is how we have that one Prince record that no one will give me back after they borrow it. And this is how we have Squid Icarus. Now, take this and don’t blow up the planet.”