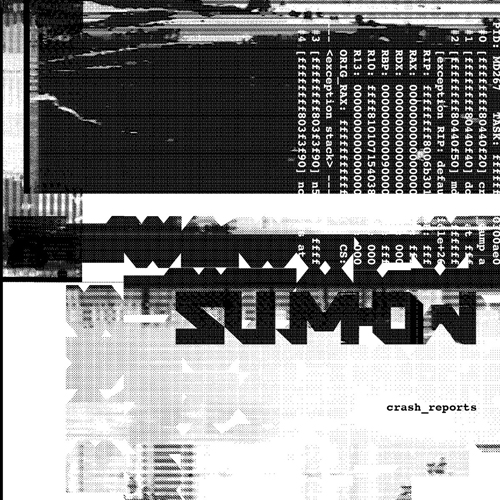 Suumhow
Category: IDM / Ambient / Experimental
Album: Crash_Reports
Blurb: Suumhow’s debut album pays tribute to the IDM acts that came before it and creates a combination of chaos and light, but the amount of chaos makes the album exhausting to get through in a single setting.

Crash_Reports is the debut album from Suumhow, a duo from Brussels. From the artwork, song titles, and general sound, one can deduce that Suumhow was heavily influenced by ‘90s era groups like Autechre, Plaid, and Ambient Selected Works era Aphex Twin, pulling various lessons from each one and reforming them into a battle between beauty and broken chaos, like light shining through corrupted data.

Crash_Reports starts off with the lucious “.4” – beatless with a warm looping pad that leaves gaps filled with light static sweeping in and out, giving off the imagery of an ocean beach with the waves rolling in. Next, “Brus L” sets up the format for most of the rest of the album. It starts with crunched and sporadic beats and eventually leads into beautiful light drops of keyboards, creating a cognitive dissonance. It has a soothing, rich, ambient synth and creates a feeling of serenity, but layered with glitched out beats that induce a sense of tension. While that feeling is an interesting one, it cannot carry an entire album, especially when there is so much chaos. The synths don’t give the listener anything to latch onto most of the time either, without a discernible melody or rhythm. Occasionally you are given a recognizable loop, like in “Small Sky,” and it becomes easier to traverse the song and admire its different facets. But it feels that those moments are few and far between.

There is a lot of thought and talent put into Crash_Reports. Each individual element sounds like it was sculpted with care. Unfortunately, the combination and arrangement of those elements did not come together in a satisfying way for this writer.