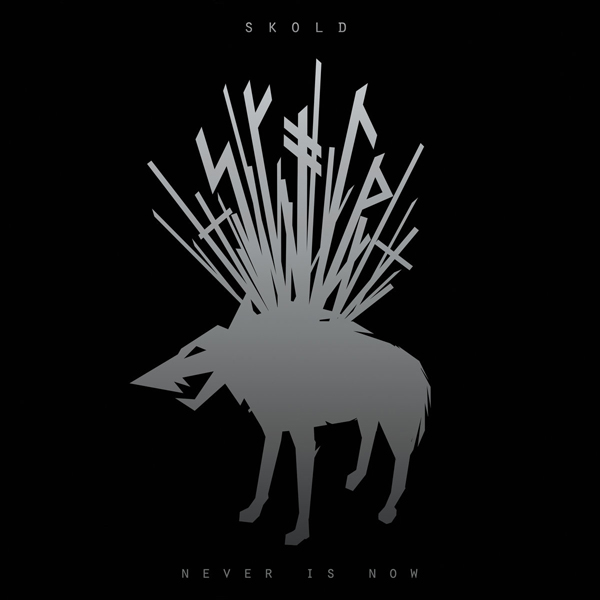 SKOLD
Category: Industrial / Rock
Album: Never Is Now
Blurb: SKOLD plays to his strengths on this latest outing, as he incorporates elements of his glam rock past and modern synthwave into his usual brand of industrial/rock… but in doing so, his musical weaknesses also become more apparent.

Tim Sköld has garnered a formidable reputation in the industrial scene, both as a collaborator and as a solo artist. The release of 2016’s The Undoing saw him taking SKOLD back into darker, more electronic territory, while still filled to the brim with the glitzy and glam-laden guitar rock textures that have been a staple of his music for 30 years. Suffice to say that he’s found his niche and he plays to it very well, but there is a sense that on his latest outing, Never Is Now, he may be playing so closely to his strengths that some of the shortcomings of his style have become all the more noticeable.

The album begins in a somber fashion as a throbbing bass and beat walk through the grim ambience of the title track, SKOLD’s signature raspy voice crooning in the verse. Then a shrill synth arpeggio in lieu of the expected guitar lick enters and he raises his singing pitch an octave for some emotional intensity in the chorus, but it’s clear that outside of the throaty screams we’re more accustomed to from him, this isn’t SKOLD’s most comfortable vocal range. The track is an exercise in dynamics in minimalism, the layers of guitar and noisy synths reaching a fever pitch in the coda, making for an effective opener that does hint at what the rest of Never Is Now has to offer. Many tracks on the album follow a similar formulaic songwriting style, leaving only certain details to enable certain songs to standout. For example, “Roses” trots along at a languid pace with a decidedly gloomy lyrical and melodic flow, but where the track excels is in its electronic textures and the slithery guitar solo. Similarly, “Be Brave” presents a burst of atonal synth and guitar textures in its unhinged bridge section, making for an onslaught of distortion that saves an otherwise maudlin and uninteresting track, and while the strutting beats and synths of “Insatiable” are quite catchy, along with an excellent glitchy synth riff, the song ultimately more of the same. Songs like “Pharmaceuticals” and “Please Remain Calm” are better executed and bear more of a likeness to SKOLD’s past glories, although the latter track’s iterations of “going nowhere fast” prove to be ironically prophetic as one of the major weaknesses of the album is in just how repetitive the songs tend to get, with many ending abruptly and in a somewhat anti-climactic manner, especially in the closing number “And So.”

Where Never Is Now does shine is on tracks like “In Another Life” and “This Is the End,” which shoot for a vibe more akin to synthwave, both full of infectious beats and chilled out synths that beckon one to the dance floor. Both are wrought with some enticing vocal effects, although “This Is the End” once again calls attention to SKOLD’s lackluster attempts to sing in a higher register. Other moments like “This Is What You Get” and “Ravenous” quicken the pace somewhat, and while texturally holding true to the album’s tonality, they would not be out of place on past outings like The Undoing or Anomie. Never one to skimp on sarcasm, SKOLD does take a few jabs at the oversaturation of materialism and shallowness in American culture on “American Bluff,” its rhythmic thrusts and scorching guitar solo reminiscent of the Sunset Strip days of Tim Tim’s youth in Shotgun Messiah, while “Small World” is almost cringeworthy for its lyrics poking fun at Disneyland, the chants of “M-O-U-S-E M-U-S-T-Die” set against howls of “Disneyland must burn” and “It’s a small world after all” more than likely to induce a few laughs in the listener. This writer must admit to being reminded of the music video for KMFDM’s “Skurk” in which SKOLD took more than a few visual potshots at ol’ Mickey, but after 17 years, the joke has worn a bit thin.

As stated, SKOLD plays to his strengths on Never Is Now, and his instrumental and production capabilities remain top notch on this record. Unfortunately, where things falter is in his propensity for lyrical simplicity and melodrama, which may draw comparisons to the emo scene, along with the less than adventurous songwriting structures that seem to draw on his glam rock past – of course, these are all elements of SKOLD’s music that have been present from the start, but they’ve perhaps started to lose their element of charm on this outing. This is not to say that Never Is Now won’t appease longtime SKOLD fans, but that may be perhaps where the audience reach for this album ends… and Tim Sköld seems perfectly fine with that.