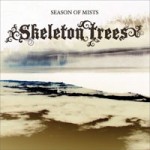 Skeleton Trees
Category: Goth / Ambient
Album: Season of Mists
Stars: 4.5
Blurb: Skeleton Trees’ debut album is one no fan of ethereal gothic music should be without.

Formed in 2007, Skeleton Trees is a band from Montreal, Canada that explores some unique territory on the debut album, Seasons of Mists. Composed primarily of Alice Morrison, Jay Bannon, Jean-David Brouillette, and Ian D’Amours, Skeleton Trees have orchestrated a wonderfully beautiful and subdued record that takes a gentle and soothing approach to thematically dark music.

Seasons of Mists begins with the mostly instrumental “Intro (Whispers in the Wind),” but the real fun begins with “The Obscuration of Dreams;” a track that fuses a number of different styles – you can hear everything from neo-folk to chamber music elements in this track and much of the record for that matter. Morrison’s vocal prowess is also in top form on this record, breathing a ghostly life into each and every song. Her vocal and lyrical style imbues the record with a significant amount of emotional weight. Flawlessly produced and mixed, you can hear every nuance of each instrument and each track flows seamlessly into the next.

Seasons of Mists is not for the attention challenged, however. While the band achieves plateaus of higher energy, it often takes time for the band to build up to them. Frequently, the record’s pace is consistently slow and steady with many of the tracks reaching upwards of 10 minutes long. As overly long songs can be a deterrent for some, it should be mentioned the fact that the vast majority of the instruments played on this record are of the organic variety, with synthetic elements taking a distant second. An incredible amount of musicianship went into this record.

For a first release, the amount of effort that went into Seasons of Mist is fairly surprising. Skeleton Trees went to great lengths to produce a work that is intricate as it is layered, as well as giving the album a very polished presentation with its artwork and packaging. My guess is we’ll be hearing plenty more from this band in the years to come.