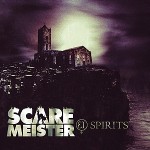 Stemming initially from a deal to provide music for horror film trailers and perform remixes, Scaremeister presents to audiences outside of the theaters an album of the act’s compositions. Given that Scaremeister combines the talents of cEvin Key, Ken “Hiwatt” Marshall, and Traz Damji, it should come as no surprise the grim and darkly unsettling nature of the tracks presented on 31 Spirits – after all, all three have been essential members or collaborators of Skinny Puppy and its various offshoots for three decades. As well, Key is no stranger to composing music for film as his work has been featured in such films as The Manson Family (originally titled Charlie’s Family) and End of Days.

Throughout the 31 tracks on the album, all of the staples of the trio’s work in their various projects together is apparent, from the deceptively complex arrangements of electronic and organic beats with decrepit, hollow ambience, and plenty of strange noises emanating from anything from manipulated samples to heavily overdriven guitars to distorted synthesizers. With no track even reaching the two-and-a-half minute mark, and each presenting in their short run times a viciously unsettling stream of consciousness designed as soundtracks to equally disturbing imagery, 31 Spirits becomes very much an album experience best listened to from beginning to end. While a track like “Hellion” might be notable for its intense array of glitchy textures and “Chamber Therapy” for its frenetic rhythms and atmospheric guitars almost demanding of a fuller treatment, and the violin-like shrieks of “Burning Cities” beneath the squelching electro beats evoke Wendy Carlos’ score for Stanley Kubrick’s The Shining, every track makes its sonic statement succinctly before dissipating into an uncomfortable few seconds of silence to allow for the next vignette. Still, there are those standout moments like the reverse piano ambience and theremin-like melody of “The Fear Of” that any listener should immediately recognize as coming from the musical masterminds behind Skinny Puppy, while “Torrent” would be an appropriate theme song for any menacing otherworldly creature. “Battle of Saints” is one of the few tracks that bear the semblance of an actual musical score with its orchestral flourishes, while the album ends with the thrum of bass and stutters of distant indistinct voices on “Premature Obituary.”

Those familiar with these musicians’ body of work will certainly find much to behold in 31 Spirits as the experiments in noise and dark ambience that form the core of Skinny Puppy, while the more dissonant rhythmic electronic elements hint at the more exploratory nature of the likes of Download. The brevity of each of these 31 Spirits is perhaps to the listeners’ benefit given their seemingly chaotic and decidedly un-melodic nature, though it does raise interest in the potential for Scaremeister to take this approach to a larger scale and score a fuller work. When viewing a horror film in a theater, there is a sense of safety in knowing that the demons can not follow you off the screen as you resume your daily life; no longer relegated simply to movie trailers, Scaremeister’s 31 Spirits removes that safety to provide you a soundtrack to your deepest fears too compelling to press the stop or skip buttons. Sleep tight.