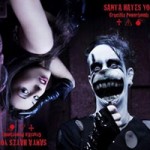 Again reinventing himself both image-and-sound-wise, Peter Spilles takes on his new carnival-like musical mystique with his offbeat side project Santa Hates You. Following the teaser EP for the single “Rocket Heart,” the Projekt Pitchfork front man and partner-in-crime Jinxy have taken the Santa Hates You consortium to superb new heights of intensity. This fresh dose of dance music in the guise of Crucifix Powerbomb is infectious and at times comically brooding. As a collection of music that’s as catchy as it is seething, the album possesses every nuance of a hit underground club album. Continuing along with the music that came of their 2007 debut album You’re on the Naughty List with its infectious repeats and in-your-face electronic melodies, Crucifix Powerbomb delivers song after song of powerful electro/industrial force. Apart from the electronica that drives the album abundantly, each song manages to highlight the sinister quality of Spilles’ vocals and the quintessential melodic backing of Jinxy. The two combine to create a fresh sound that circumvents the music found on any earlier Pitchfork album, creating a unique identity for the band – one that’s fraught with playful and foreboding humour. This is not to say that the lyrical play and visual pageantry that the band possesses becomes anywhere near ludicrous in nature. Levels of dark comedic play encapsulate and elevate the style and overall image of the band beyond that of anything that Spilles has done throughout his years with Pitchfork. Chopping the serious intensity of his vocals and lightening the overall mood of the album, Jinxy takes the reigns with a feminine touch that oozes bubbly sexuality. It’s her performances in the background and alongside the lead vocals that take this album away from the darkness of Spilles’ alter-ego band. Here, Jinxy is to sexy what Spilles is to sinister, and the balance works incredibly well throughout the album. It’s essentially a refreshing and lighthearted take on some familiar old sounds. On that note, Crucifix Powerbomb as a complete album will not only entertain audiophiles and club-goers alike, but also provides a nice entry into the wonderfully morose musical world of Peter Spilles. Synthesized gothic electronica typically merges well with an industrial dance influence, and it’s through this defined sound that Crucifix Powerbomb becomes as successful as it is.