Rhys Fulber – Your Dystopia, My Utopia0 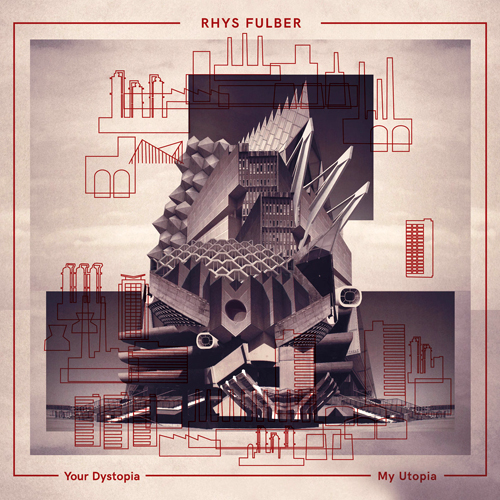 Rhys Fulber
Category: Industrial / Electronic / Experimental
Album: Your Dystopia, My Utopia
Blurb: One of modern music’s most revered and prolific artists and producers, Rhys Fulber finally goes solo with this first full-length album wherein he revels in his element and crafts an audio habitat suitable for cybernetic entity.

With a list of production, remix, and performance credits that reads like a who’s who of all that modern music has beheld over the last three decades, it’s difficult to believe that Rhys Fulber only recently began to release music under his own moniker. Beginning with the Realism EP in 2017 and now culminating in this full-length album, Fulber’s solo output takes on a grungier and less polished veneer than one might expect from someone who helped to virtually define the parameters by which we judge production in the realms of experimental electronic and industrial music. The aptly titled Your Dystopia, My Utopia presents Fulber’s abrasive and rhythmic musical vision, a soundtrack to a cold and mechanized world where only a cybernetically enhanced entity could hope to find solace.

“Cognitivia” begins the proceedings as a steady buildup of ominous synthesized backdrops and a deeply manipulated narration gives way to a forceful beat, the distorted clangs of the snares and the repeated whispers creating a technologically decrepit soundscape whereupon harrowing pads plunge the listener into a seemingly unyielding state of tension and anxiety. As each track marches on, the record barely loosens its steely talons on the listener’s psych – from the aggressively distorted thrusts of mechanoid vocal samples and punchy beats underscored by a hollow ambient howls and pulsating bass in “Inhabits Eternity,” to the throbbing rhythms of “Anhedonia” punctuated by lyrical progressions of choral pads, to the stabs and howls of brooding ambience and metallic electronic scrapes on “The Sick,” right on to the slithering electronics and martial percussive onslaught of “Truncheon.” It will be difficult to not hear traces of Fulber’s past work on this album, with the aforementioned tracks perhaps bearing the greatest resemblance to Front Line Assembly. The same can be said most especially of “Creosote,” whose relentless and menacing atmosphere would not have been out of place on an album like Civilization or even Tactical Neural Implant, while the presence of Marc Heal’s narration amid whiplash breakbeats, trickling piano refrains, and vitriolic layers of pads and bass leads on “My Church” gives the track a somewhat insidious character slightly reminiscent of C-Tec.

Rhys Fulber pulls all the stops on Your Dystopia, My Utopia, crafting a sonic landscape whereupon the detritus of fallen civilizations gives rise to an uncertain technological future. One can hear the history of EBM, techno, and rhythmic industrial laid out across the album’s nine tracks, which is unsurprising given Fulber’s significance in it. As such, Your Dystopia, My Utopia is far from a groundbreaking effort, but coming from such a pioneering and creative force as Rhys Fulber, does it need to be? No… this the sound of a man absolutely in his element, making the album a monument of stylistic integrity and artistic purity.

Purchase at:
Amazon Vinyl
Bandcamp
Storming the Base Vinyl