Retrogramme – For Our Dearly Departed1 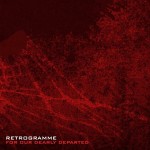 Retrogramme
Category: Electro
Album: For Our Dearly Departed
Stars: 3.5
Blurb: A disjointed yet cohesive blend of varying forms of electronic music, showing this DC band progressing beyond its humbler beginnings.

The Washington, DC electronic collective known as Retrogramme has certainly made some remarkable strides since their self-titled, self-released debut in 2008. As the duo of Rob Early and Nikk Allen performed across the East Coast circuit, displaying an energetic mix of various forms of electronic music, the band’s name steadily gained recognition in the local scene and beyond, releasing the Season of Scars EP with Octofoil Records and landing an exclusive track on the second entry of the massive popular Electronic Saviors compilation. Now having formed Red Basement Records and with the addition of Dmitry Pavlovsky to the studio lineup and guest appearances from former member of Impulse Control and other fellow local acts, Retrogramme unveils a sophomore full-length that takes the band’s already varied blend of electro even further.

Never content to stick to one style, Retrogramme pulls all the stops with For Our Dearly Departed, demonstrating an exploratory spirit that could be off-putting to those not familiar with the band. “Save Without a Grudge” and “My Advice” reveal highly melodic and vigorous drum & bass sensibilities, while “Fell Upon Deaf Ears” is a much more somber helping of ambient trip-hop. Pavlovsky’s voice is smooth and airy throughout, complementing the inherent catchiness of the beats and bass lines, especially in “Heaven is Closer than You Think,” which explodes into an anthemic and blissful chorus. For further musical schizophrenia, the off-kilter progression and gritty synths of “Patricia” bear a semblance to the likes of Wolfsheim, with Laya “Fix” Monarez’s guest vocal playing a balancing act between emotively satisfying and flavorfully off-key. On a similar note, “Milanah” creates an unsettling atmosphere with Adriane Beveridge’s voice moving from an insidious whisper to an ethereal spoken word as Jay Smith’s subtle work on the guitar adds to the track’s mysticism, while the instrumentally bouncy and delightfully atonal “Sanctuary” might be the only track to resemble something that would’ve appeared on the band’s first album. Filling out the album are a handful of remixes, including Retrogramme’s ReKonStrct of “Temporary Love,” originally the title track on Dmitry Pavlovsky’s Selfish Boy release, making for a bouncy helping of lounge-worthy electro/funk. On the other hand, the Selfish Boy ReKonStrct of “My Advice” transforms the song into a blazing mix of psychedelic ambience and danceable new wave, while the Models and Machines remix of “Heaven is Closer” by Xavier Swafford and Val Cain aims for the dance floor and hits the mark quite well. Live keyboardist/vocalist Chad Collier lends his Force Drift version of “Share the Cancer” – re-titled “Cancer Remissed” – for a punchy and powerful EBM mix, though his distorted vocals, effective as they may be, do feel out of place on the album.

For Our Dearly Departed does as any good second album should and presents a band putting forth a significant effort not to repeat itself. Indeed, Early, Allen, and Pavlovsky with their associates have crafted a finely assorted blend of rhythmic and melodic electro music that expands on their previous formulas while adhering to their inherent mix of experimentalism and mass appeal. The diverse range of tastes at play may perhaps be just outside the bounds of uniformity for some, making For Our Dearly Departed a disjointed listen, if one that is enjoyably so. If nothing else, there is a cohesive flow from beginning to end that makes the album worth the listen and Retrogramme a band to keep one’s ears open for.