Remora – I Came to Party EP0 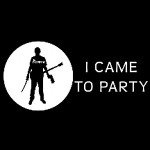 Remora
Category: Experimental / Noise
Album: I Came to Party EP
Stars: 0.5
Blurb: With perhaps the most misleading album title ever, Remora’s new EP pukes and passes out before the party even starts.

Every now and then, an album is released that alters the course of music. Transcendent songwriting, jaw dropping musicianship, and ground breaking image all add up to create a force so powerful, so universal, that it completely defies the tradition of everything that came before it. For example, Led Zepplin’s IV, Nirvana’s Nevermind or Psalm 69 from Ministry – real game changers. Now, take everything that made those records (or any of your personal favorites) great and strip it all away. Add on a nice layer of pretention and finish it all off with a lame record company gimmick, and you would be left with Remora’s new EP, I Came to Party.

When an artist names an album I Came to Party, a certain amount of expectations are sure to follow – high energy, fun, upbeat dance songs would be appropriate fare for an EP titled as such. Instead, Remora provides a soundtrack of boring, uninspired, and sometimes downright creepy songs. The EP kicks off with “I Don’t Know.” It is perhaps the only track on the EP that sees the group stretch its legs a bit by featuring an intriguing chord progression and vocals that can almost pass for singing. “I Came to Party” showcases minimal musicianship and is guaranteed to convince no one listening that this dude really wants to party. “We’re All Filled with Blood” features a heavily distorted drone guitar and is easily the most (only) enjoyable cut from the record. “In the Future” should be used as the soundtrack for a PSA warning of the dangers of drug use because there is no way a song like this is made without the use of some type of mind altering substance. The album closes with the 41 second (more on that in a minute) turd titled “Girl I Wanna Date You.” A droning guitar sound is looped over a high hat that sounds like it was sampled from a Casio starter keyboard. All the while, the “singer” repeats the title over and over, coming across as less of an invitation and more of a threat.

As bad as I Came to Party is, all of the blame cannot be placed squarely on the shoulders of Remora. The EP, released by Silber Records, is part of the label’s “Five in Five EP Series.” The premise behind this is to have a band complete five songs in five minutes. As a result, I Came to Party checks in just shy of the five minute mark. As if it weren’t difficult enough to produce meaningful music, the limitations set forth make it nearly impossible to create music that’s enjoyable, let alone memorable. Even for a label that leans more towards the avant-garde, the idea of limiting an artist creatively comes across as a foolish endeavor, and is only proven with the terrible results yielded on this embarrassing EP. With I Came to Party, Remora clearly isn’t trying to record the next White Album, but it doesn’t even come across like the band is trying at all.