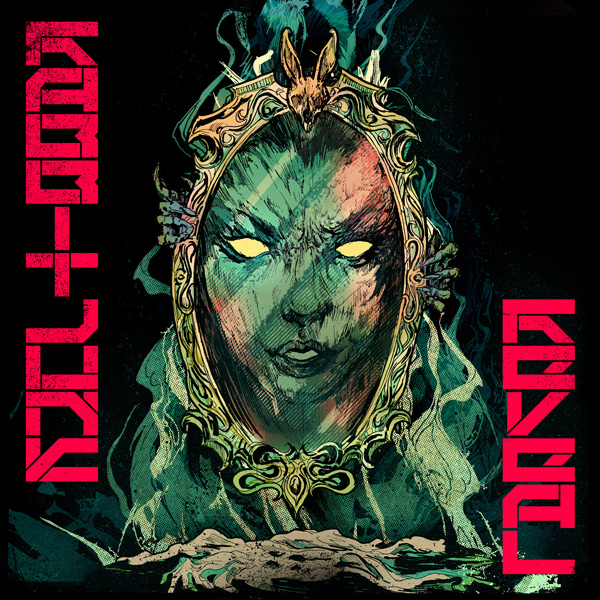 Rabbit Junk
Category: Industrial / Electronic / Rock
Album: Reveal EP
Blurb: Although only containing three new tracks, presented in both vocal and instrumental versions, this latest EP from Rabbit Junk ups the ante with some of the band’s most emotive, melodic, and evocative material yet.

One can imagine that following up such an accomplishment as 2018’s Meditations on Mortality would be a difficult feat, having attained a level of production and songwriting quality that could measure up to the highest echelon of the modern music scene. But Rabbit Junk has always proved up to the challenge of topping itself with each release as JP Anderson continually incorporates new sounds and influences into what has become a singularly diverse yet identifiable sound. With Reveal, the band progresses further down the path laid out by the previous album as the EP’s three tracks craft a thematic narrative that is sure to please yet still surprise longtime Rabbit Junkies.

Aided and abetted by fellow genre bending rabble rouser Amelia Arsenic, “Born and Bled” begins with an immediate jolt as shouts of “What’s the matter with you?” blast through the speakers. An onslaught of electrified breakbeats and thrashing guitar and synth riffs enter the fray as Arsenic’s and Anderson’s incendiary and anthemic vocals exchange blows with the listener’s psyche, the track waxing and waning through progressions of industrialized trap-meets-metal. It’s just what one would expect a collaboration between Rabbit Junk and Amelia Arsenic to sound like, with the only criticism this writer can offer being the song’s rather abrupt ending coming off as somewhat anti-climactic as the instrumental powers down for Arsenic’s descending chorus refrain to dissipate into a near fadeout. However, this does actually prove to be an effective segue into “Survivor,” which takes on the character of an electro/metal power ballad. Skittering synth passages and steely ambient effects in the verses give way to an emotionally charged chorus, Anderson’s impassioned delivery of lines like “I was born in the fire / I’m a motherfucking survivor” proving to be among Rabbit Junk’s most poignant and oddly poppy. But what is even more notable about “Survivor” is the bridge section, in which percolating guitars and faux-string pads coalesce into an almost symphonic display reminiscent of the previous album’s “Bend the Light” or Anderson’s cover of Toto’s theme for David Lynch’s Dune; if nothing else, this specific portion of the song shows just how far his musical skills have advanced beyond the punklike assault most associate with Rabbit Junk. And then, we have “Reveal,” and if ever a track could be called addictive in its outright catchiness… well, this would be it. Set to a forcefully danceable beat and thrusting yet fluid, sometimes even celestial synth lines that belie the song’s lack of guitars, Anderson and Sum Grrrl singing their hearts out with some intensely saccharine and engaging vocal hooks, “Reveal” is simply an outstanding track.

With instrumental versions of the three tracks padding things out, Reveal offers up a brief but excellent entry in Rabbit Junk’s discography, one that places a subtle emphasis on the depth of JP Anderson’s songwriting abilities without sacrificing the confrontational abrasion that has earned the band a significant portion of its audience. Add to that some evocative and striking artwork by Andrew Tremblay, who provides each track with its own visual accompaniment to reveal (no pun intended) the beastly nature that resides within each of us – “I can’t turn away when the truth is ugly.” Bravo, Rabbit Junk!