Phantom of the Black Hills – Enemy!0 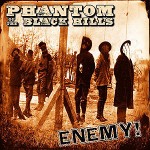 There was once a time when country and southern rock was part of the counterculture, quick to espouse a sociopolitical viewpoint opposite to that of the status quo. While the mainstream sensibilities of the genre have overtime gravitated toward a less incendiary outlook, a band like Phantom of the Black Hills comes along to give the style a firm kick in the arse with a raucous sound and image that is sure to attract a more adventurous audience. Indeed, to even look at the band adorned in bandana masks and Stetson hats, brandishing bottles of booze, pistols, and their instruments, one could draw comparisons to some bluegrass derivation of Slipknot. Thankfully, Phantom of the Black Hills comes across as less comical, though the music is not devoid of anger and abrasion with a fair share of whimsy. “Battle Cry” begins the album with guns blazing, a whooshing electronic wind leading into the sound of fiddles and banjos meshing with the grittily distorted guitars, The Phantom shouting out his rebellious lyrics in a style immediately reminiscent of Chemlab’s Jared Louche. The rest of the album follows suit with a firmly anti-establishment vibe permeating throughout, with lyrics like “You think you’re fit to go to war? Can’t even figure out which way to point the sword” on the title track, “If it’s law don’t make it right” on “If Hell’s Where I Have to Be,” and the abundance of politically charged samples on “Evil Dove.” Other songs like “Bled for No Reason,” “Read My Bible,” and “One Per Sinner” also convey a lyrical predilection against war and hypocrisy, while the music maintains a steady rock pace from beginning to end, each instrument given its moment to shine. Produced by Chopper Franklin of the Cramps and mixed by Geza X, whose credits include the likes of Dead Kennedys and Black Flag, Phantom of the Black Hills’ third album is a surprisingly innovative album. Eschewing the clean cut conventions of modern country, Enemy! is raucous and rambunctious from start to finish; the product of a band firmly planted in its southern roots but with a gutturally mechanical vibe that should appeal to rivetheads, revealing an exploratory spirit that should appeal to more underground tastes.