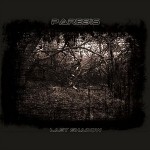 Paresis is Simon Fuller, who hails from the UK. Equipped with nothing but a guitar, keyboard, and computer, he creates a brief but fun ensemble on Last Shadow. This installment of his discography features three original tracks and six supplemental remixes of the tertiary songs. “At Your Command,” the superlative track of Fuller’s original work, would be appropriate as an accompaniment to a burlesque show with a doom motif (perhaps in a setting where patrons don gasmasks or similar types of cyberpunk fashion to be cliché). The Je$us Loves Amerika remix of “At Your Command” (a secret bonus track on the disc) is even more fitting of such an environment as it features a lovely female vocalist who is, unfortunately, left unnamed on the album credits. The piece is a pleasant earworm and will make one want to listen to it repeatedly. The DigiCore remix of “Demons We Are” gives a similar response as it makes a listener want to dance. However, it holds a larger difference from the original title in comparison to “At Your Command” and its Je$us Loves Amerika remix; “Demons We Are” is a guttural, aggressive industrial track as a standalone, whereas its remix is a polished dubstep variation, and the “At Your Command” adaptation holds more of the original foundation than the DigiCore remix. Nonetheless, this writer looks forward to hearing more music from Paresis; Last Shadow is solely the second album in Simon Fuller’s repertoire.