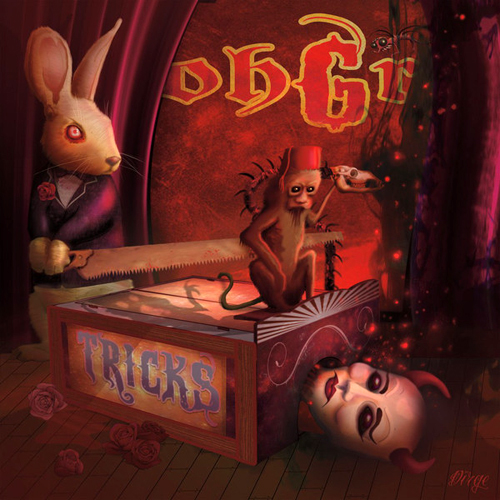 ohGr
Category: Experimental / Industrial / Electro-pop
Album: TrickS
Blurb: After a long wait, we are finally treated to the fifth full-length album from ohGr, and although there are moments that can sound like retreading ground already explored, it remains a brilliant slow burn.

“Get ready for the FreAky side of nature” – so warns the introductory track on the latest outing from the electro/industrial duo of ohGr, letting listeners know within the first few seconds of the band’s fifth album what they’re in for. Funded via a PledgeMusic campaign, TrickS comes a full seven years since the highly acclaimed unDeveloped, during which time the enigmatic and eminent figure beloved by the underground music scene as Nivek Ogre was concentrating on a myriad of other projects, not the least of which was appearing in Terrance Zdunich’s The Devil’s Carnival series and a recurring role on Teen Wolf. When the band returned to tour with KMFDM in 2017 with a set of favorites from ohGr’s past records, there was little to no indication as to just what sort of TrickS Ogre and Mark Walk had up their sleeves for this album.

From the onset, the signatures of ohGr’s sound are presented in full abundance, with the palette of sounds ever skating that line between organic and artificial; synths and guitars clash with forceful, carefully programmed beats, as Ogre sings with his usual varied panache. In fact, this writer must admit that TrickS was a bit of a slow burn as the initial reaction was that the album relied perhaps too heavily on these signatures where the intricacy of the production belied the band’s sticking to a formula fans already know and love to result in a less than adventurous outing. But herein lies the brilliance of ohGr’s craft (and to an extent the pair’s work in Skinny Puppy), to take the familiar and mangle it into a singular concoction all its own. For example, a song like “ResoLuTe” begins with a rather creepy gated synth that fades in and out, creating an effect akin to a helicopter, before kicking into a beat that bears a striking resemblance to “Cracker” from Welt, its minimal bass line both simple and insidious. As well, “dUe they kNow” is notable for its subtle progressions of alternating chord structures and waves of effects, along with a synth hook that sounds like the bastard child of Gary Numan and Thomas Dolby; along with swelling orchestral pads and Ogre’s distinct and dramatically effected voice, it’s a very busy, very nuanced track. Even in the opening “FreAky,” the subtly ascending shift in tempo during the coda adds just that tinge of unease so intrinsic to ohGr, but it is the venomous, rather epic sounding “Mind made goD” that may stand as one of the duo’s most accomplished tracks.

Never afraid to infuse a good pop-friendly melody, the title track stands as one of ohGr’s catchiest melodies as the chants of “The mind, mind, mind plays tricks” simply digs its way into the listener’s psyche, making for a bouncy synthpop romp that would rival any of the current trends of ‘80s synthwave. The same could almost be said of “MudDle,” which bears an almost lo-fi quality as its harmonious blend of poppy melody and danceable beats render it one of the album’s lighter, albeit less memorable moments. And while the juxtaposition of punchy electro and saccharine acoustic textures in “SubjecT” make for a great track, it also bears a likeness to similar modes on Welt and SunnyPsyOp. On the other hand, the menacing dance groove along with a simple two-note bass progression that barely deviates in “BlowBy,” Ogre’s vocals characteristically drenched in effects, creates a dark vibe that is perhaps more reminiscent of Skinny Puppy than ohGr. The same can be said of the album’s closing track, “LYe,” on which some acerbic, almost growling synth effects and rhythmic vocal delivery meshes with bleak progressions and grizzled chants of “It’s a lie” and “Now be good, now be gone” that are sure to remind some of Skinny Puppy’s “DaddyuWarbash” or “Ghostman.”

TrickS is a strange album, and that alone is something of a feat for artists like Nivek Ogre and Mark Walk, whose exploratory output has legendarily broken all the rules to create something very much their own. As stated, this is part of what makes ohGr such a unique entity, and it is indeed a strength on TrickS, but it can also be an encumbrance as the presence of elements that have been fundamental to their approach over the years tend to get slightly in the way. What this does, however, is force the listener to dig deep into its polished production for those flashes of luster that can only come from figures of such renown. I can’t say that TrickS is ohGr’s best work yet, but it is a record whose genius reveals itself slowly over repeated listens.