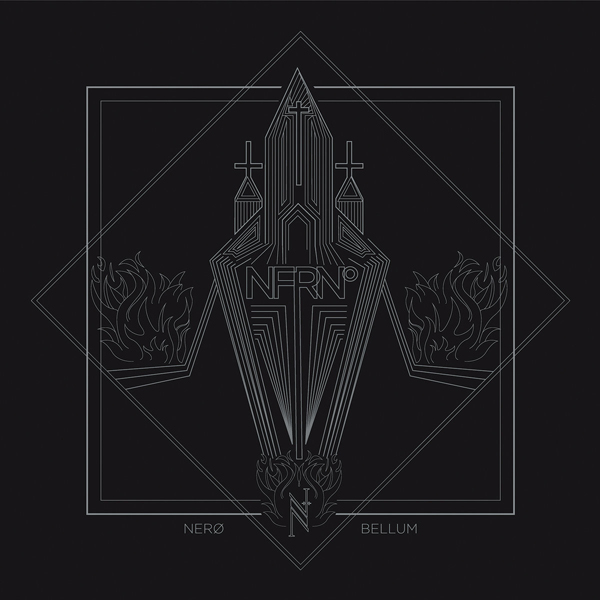 There is always some value to whenever an artist attempts to break free from the style established by past releases. Nero Bellum has spent 20 years fronting Psyclon Nine, presenting a fiercely confrontational style of aggrotech that blends the grim and occultic aesthetics of black metal with a decidedly aggressive electro/industrial sound. However, for his first solo outing, he embarks on a more experimental approach in utilizing modular synthesis akin to the pioneering works of Morton Subotnik and Suzanne Ciani. As such, NFRNº was recorded over the course of two years as a series of live improvisations with no overdubs or computerized assistance. Such a description immediately conjures up notions in one’s mind as to what such an album would sound like, but the results may prove to be even more esoteric than expected.

The album begins with “Another Prayer to Lucifer,” in which randomized pulses of synthesized bass are glitched out and modulated at a creeping pace, the metallic shrieks and howls rising in prominence and amplifying the tension before a deafening explosion of percussive bass arrives halfway through, eventually fading back into the sonic miasma. Occasional bursts of arpeggiated sequences punch through, as if threatening to mutate into a darkly enticing EBM/industrial track a la Psyclon Nine, but Bellum stays the course. It’s a rather excellent dark ambient piece, and it certainly sets the stage for what is to come… perhaps a little too well, for each track on NFRNº follows a similar pattern; granted, this is partially the intent as the tendency of live improvisation is that the structure of the tracks are dictated by the process, and Bellum certainly evokes an almost ritualistic fascination throughout the album. For example, “All Feathers Ripped Out” is set to a rather viciously mechanical drumbeat, the squelches of synth seething like the labored breathing of a ravenous creature, a sustained pad waxing and waning to keep the listener on edge as the intensity gradually builds to a fever pitch of tribal fury, while the steely and resonant bass progressions and atonal yet compelling arpeggios of “An Angel’s Offering” stand as one of the album’s decidedly melodic excursions. The same can be said of “Stranded” as it achieves harmony in cacophony, the synths almost singing to the listener in a manner reminiscent of the early ambient experiments of IDM artists like Autechre and Aphex Twin.

Moments of brilliance are sprinkled throughout each track – the icy and throaty ambience of “Weapon” set to spastic waves of percussive synth, the noisy yet resonant waves of sustained notes creating a pensive electronic choir on “The Beauty in Something Broken,” and what sounds like mangled and manipulated voices on “A Candle Once Burned,” swelling in and out of the mix as groaning modulations akin to those heard on the opening track all stand out. Even the closing track, “Never Good Enough” moves at a languid pace as warbles of percussive noise underscore a wispy progression of soothing ambience; like a tone poem to provide the faintest glimmer of light to guide you through the darkness.

NFRNº is indeed a difficult journey for the listener to take, one wrought with fevered repetition and arcane instrumental litanies of electronic exploration the likes of which usually adorn labels like Cyclic Law or Malignant Records. The noisy extremities of experimental synthesis can occasionally prove uncomfortable for those without an ear for this sort of thing, and the limits of one’s patience may be stretched as those aforementioned moments of brilliance are literally spread about in such a way that the listener must search in waiting for them amid tracks whose runtimes feel longer than perhaps necessary. Still, there is also a sense that Bellum is enjoying allowing himself to become lost in the living practice. Where Psyclon Nine is a punch to the face, NFRNº is more of a slow poison, both achieving the same results in offering the listener’s soul up in sacrifice.