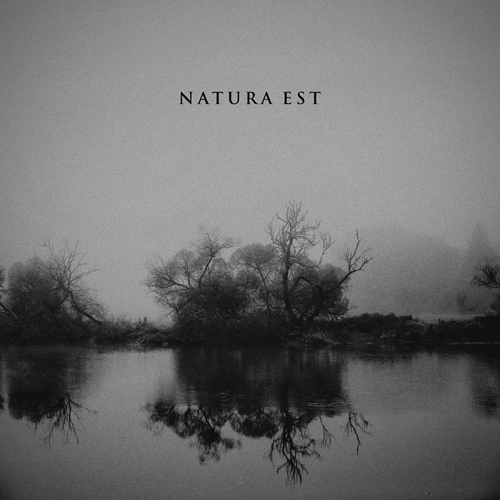 Tony Young and Andreas Davids have both carved out their own niches in experimental electronic music in their respective projects, Autoclav1.1 and Xotox. With Natura Est, the two have embarked on a new sonic journey to explore the more atmospheric realms of their music, eschewing the intricate beat structures and complex arrangements of IDM, EBM, and industrial for a darker voyage into droning ambience. The five tracks on this self-titled album sprawl through hazily resonant layers of sound that evoke a myriad of images and emotions, many of which are sure to be as gloomy and as monochromatic as the record’s cover image. Such albums are rather difficult to assess given that they tend to be so minimal in execution, relying purely on the effect that such sounds have on the listener.

For instance, sustained lines of distorted pads create an almost choral vibe on a track like “The Soil,” the oscillations of sound bellowing and raising in volume like an approaching tide about to crash upon you, threatening to ensnare you in the clutches of an inescapable current, the faint hints of a sparse melody slowly creeping through the speakers. Similarly, “The Root” opens the album with the intimation of voices reverberating infinitely into a deep chasm, devoid of all form aside from the sparkles of a crystalline pad that is only revealed halfway through its nearly nine minute length, while washes of a repeating subsonic harmony hover like audio clouds fading colorlessly into an endless void in the appropriately titled “Grey Skies,” eventually breaking open to reveal a shimmer of light in the form of subtle static flickers and plinks of a high-pitched sound that might’ve once been a piano. “Causatum” closes the record out with an almost aquatic atmosphere, like being plunged into the abysmal depths unseen by light or human eyes, but “Black Town” proves to be the anomaly on Natura Est. The track introduces a hollow but distinctly mechanical beat, the dark drones taking on the character of plumes of smoke as a shrill static sequence rises in intensity like a factory on the verge of collapse; it’s rather reminiscent of the soundscapes one might hear in a David Lynch movie.

Each track holds its own sense of nuance and sonic discovery, but they may require a good set of headphones and a great deal of patience. Young and Davids are certainly in no shortage of skills or experience, and it is refreshing to hear them pursuing a musical direction apart from their better known outlets, but it might have been nice to hear some greater variation on Natura Est. For all of its minimal and droning ambience, the record offers little surprises and may invariably be relegated to the role of background noise.