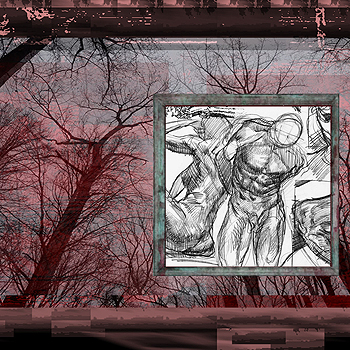 After the auspicious Actualiser debut, Baltimore’s Nahja Mora ups the ante with a second helping of the project’s venomous brand of caustic industrialized soundscapes. While the previous album dealt with themes of self examination and realization, The Trees See More pursues as its title suggests a broader and perhaps more universal focus. Josef Saint, along with a contingent of collaborators, crafts a vicious portrait of a world succumbing to the all-too-real evils of material and spiritual corruption, resulting in what Nahja Mora refers to as “the traumatic death of spirit.”

Though no less abrasive in the extremes to which Saint will mangle and manipulate sound and challenge the listener’s auditory and mental stamina, The Trees See More does show an evolution of actual composition and a more defined sense of songwriting craft. A track like “Dream Dead” comes across as heavily nuanced with its juxtaposition of noise and melody as almost bluesy piano lines and vocals that switch between seething distorted and detached hollowness actually evoke a melancholy arrangement that despite its acidic beginning comes across as hauntingly beautiful. Similarly, tracks like “Removal” and “Inside Out” hit hard with a punchy beats that intermingle with the deteriorated onslaught of screeching vocal distortions and angular bass sequences, offset by the wax and wane of samples and the percolating waves of gated synth pads that evoke a series of morose melodic progressions. “God” is one of the album’s more notable moments as the atmospheric interplay of intricately programmed beats with a catchy bass and lush pad sequences anchors the song in a musical framework amid the flurry of sampled and glitch-laden chaos, while Precision Field’s Devil’s Bible remix of the song puts the rhythmic elements on overdrive. “The Very Last of Summer” may be the most memorable track on the album as gritty breakbeats and glassy, glitchy synth leads overlay an excellent layering of harmonious pads that eventually concludes with a beautiful chiptune coda; put simply, this track is gorgeous.

With three additional remixes of tracks from Actualiser, The Trees See More is a much more robust offering than its predecessor both in length and in content. Comparisons to Skinny Puppy’s early ‘90s output like Too Dark Park and Last Rites still apply, but with this second album, Josef Saint demonstrates his abilities as a producer and composer are not limited to past influences. He’s not simply concocting noisy explorations of sound; he can actually write music without adhering to the conventions of the pop songwriting format in favor of a more sophisticated style that bridges symphony with cacophony. Add to that a decrepit lyrical mindset that addresses the real life horrors that lead to societal decay, and you have all the ingredients for an experimental industrial gem.