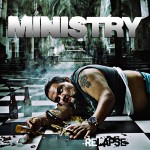 Ministry
Category: Industrial / Metal
Album: Relapse
Stars: 3.5
Blurb: Consistent yet diverse, the champions of industrial/metal return with an album that is among the most aggressively satisfying in the history of Ministry.

An ambient soundscape of tapped guitar arpeggios and manipulated samples begins. A grizzly voice sardonically remarks on the greed and opportunism of the music business, stating the names of several fallen rock & roll idols, proclaiming them to be the lucky ones for being dead, ending loudly and proudly, “But I’m not dead!” So begins Relapse, the twelfth album from the industrial/metal juggernaut that is Ministry, the first album of new material since the band dissolved after the 2008 C.U.LaTour. Living up to its title, Relapse features Ministry at its best, with all the hallmarks of the band’s sound over the past 30 years in full swing – from the venomous vocals to the raucous riffs to the precise and powerful percussion and programming. Renowned for his sociopolitical ranting and raving, front man Al Jourgensen demonstrates once and for all that a Republican need not be in office for him to produce an album of unbridled scorn for the status quo and unabashed disdain for oppressive authority.

Not one to allow the pressures of money or record label politics dictate his career or his musical path, Relapse is no hackneyed cash-in on the Ministry name. Indeed, on the aforementioned “Ghouldiggers,” on which he relates that a onetime manager stated, “When you’re dead, we can sell you off in pieces,” an all too relevant observation given the plethora of material released under the Ministry moniker since the supposed disbanding of four years ago. No, what Jourgensen and his motley crew of maniacal collaborators offer on Relapse is all that Ministry fans could want. The leadoff single, “99 Percenters” is perhaps the simplest (and downright silliest) example of the album’s lyricism as ol’ Uncle Al bellows out a rallying cry in support of the nationwide occupy movements. In true Ministry fashion, tracks like “Kleptocracy,” “Get Up Get Out n’ Vote,” and the cover of punk legends S.O.D.’s “United Forces” maintain the band’s leftist political leanings, decrying the overt corporatism and social complacency that allows such corrupt systems to govern them. Other tracks like “Freefall” and the title track are more personal and biographical, touching on Jourgensen’s past addictions and cantankerous attitude that has been a staple of Ministry’s image and humor.

Musically, Relapse is perhaps the most sonically uniform in the band’s history. From the violent thrash of jackhammer beats and guitars befitting the song’s themes of political assassination on “Double Tap” and the turbulence of addiction on “Freefall” to the almost bluesy cadence and riffs in the verses leading to an ambient mix of vocal harmonies and clean guitar arpeggios on “Bloodlust,” Ministry pulls all the punches. With Mike Scaccia, Tommy Victor, and Sin Quirin slinging their six-strings, firing off machine gun riffs and whirlwind solos, and bassists Casey Orr and Tony Campos providing the thunderous bass, Jourgensen’s vocals growl and howl with uncharacteristic clarity. Even the simplistic and speedy punk of “United Forces” and the pulsating synthesizers and samples of the Defibrillator mix of “Relapse” maintaining the song’s acerbic edge only enhance the album’s variety and help to make Relapse perhaps Ministry’s most cohesive and consistent efforts.