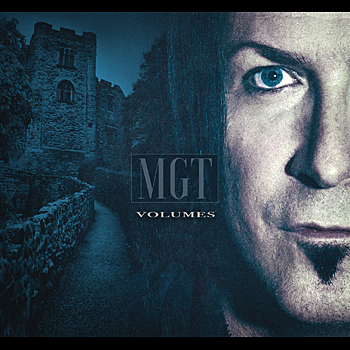 Over the course of a three-decade-long career, Mark Gemini Thwaite has become one of the most renowned and sought after session guitarists in the goth/rock and industrial scene. He’s lent his skills to a wide and diverse range of artists, all the while cultivating a signature touch on the instrument that even amid changing styles has retained his unique musical identity. Volumes marks MGT’s first solo outing – appropriately titled not just for the rocking and melodic range of his guitar playing, but also as a showcase of his many years as a career guitarist, with more than a few notable guest vocalists for good measure.

Normally, this writer would say that a cover track is too safe a bet for an opening number on any album, but with H.I.M.’s Ville Valo lending his sensual baritone to “Knowing Me Knowing You,” MGT infuses the ABBA classic with a burst of sheer power that while absolutely faithful to the original manages to sound as fresh and as any of his own compositions adorning Volumes. The Awakening front man Ashton Nyte appears on two of the album’s more instantly fetching songs, as “The Reaping” and “Jesamine” bear a particularly urgency in the rhythms, the energetic guitars, and some rather catchy chorus melodies, while The Mission’s Wayne Hussey helps give “Another Snake in the Grass” a bluesy quality that blends well with the dirtily electric beats, coming across like something out of post-Violator era Depeche Mode. Similarly, the angular and intertwining guitar lines of “Coming Clean” bellow with a gritty swagger befitting Raymond Watt’s particular brand of lyrical and emotive sleaze, and Julianne Regan’s velvety smooth voice gives the sparkling acoustic arpeggios and suitably subtle atmosphere’s of “Star Struck Eyes” a sultry, almost ‘80s glam tone that makes for one of the album’s more intoxicating moments. The Wonder Stuff’s Miles Hunt gives tracks like “You Can’t Go Back” and “It Won’t Take U Long” a melodic power that reminds this listener of U2’s better, more obscure moments, Republica’s Saffron gives her usual bravado and boisterousness to the blissfully catchy “Seconds,” and Ricky Warwick’s bluesy drawl on “Drive & Forget” is almost reminiscent of heartland rock a la John Mellencamp. Also in the same vein is “Another Day Back” with its galloping acoustic guitar and fiddle accompaniment, the duet between Hunt and Erica Nockalls giving the ballad a hauntingly poetic feel, while Andi Sex Gang’s disconcerting harmonies on the melancholic dirge of “Dark Storm” makes a darkly foreboding note to end Volumes on.

Any album featuring such a varied assortment of guest vocalists and musical styles would run the risk of sounding inconsistent, but Volumes somehow manages to avoid this pitfall, partially due to MGT’s vibrant songwriting and edgy guitar textures as the glue that holds the album together (it is his solo album, after all). Deliberately avoiding the histrionic inevitabilities of virtuosic exhibitions that most guitarists’ solo albums tend to be, Mark Gemini Thwaite instead fashions a highly listenable and quite captivating collection of songs that draws more on his strengths not just as a guitarist but as a composer. In short, Volumes is quite an excellent album indeed.

Purchase at:
Amazon CD
Storming the Base CD
SPV Vendor