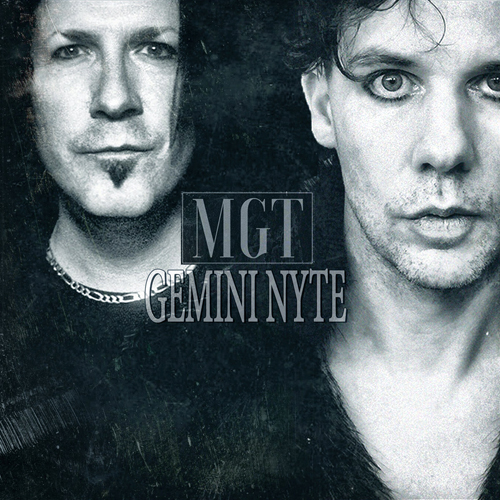 MGT
Category: Alt. / Goth / Rock
Album: Gemini Nyte
Blurb: More powerful and confident than its predecessor, this second release from MGT stands almost as a celebration of the entirety of the goth/rock genre.

With the 2016 release of Volumes, guitarist extraordinaire Mark Gemini Thwaite had the opportunity to showcase his musical skills as a songwriter and producer with the aid of a bevy of guest vocalists; among the more notable was South African goth/rocker Ashton Nyte of The Awakening, whose appearance on two of the album’s most fetching tracks would spark a collaboration that has proven to be one of the more fruitful of Thwaite’s illustrious career. While the initial plan was to begin a new project, their partnership was to become the core of the second MGT album, appropriately named Gemini Nyte. No less varied than its predecessor, Gemini Nyte achieves that sturdy and streamlined character that usually can only be accomplished by a tight-knit unit, with Thwaite and Nyte backed steadfastly by the percussive force of Killing Joke drummer “Big Paul” Ferguson and the mixing skills of the renowned John Fryer.

From the onset, Gemini Nyte establishes itself as a more confident outing as “All the Broken Things” begins the proceedings with Ferguson’s strident rhythms and Thwaite’s shimmering guitar lines, Nyte’s emotive harmonies immediately striking and passionate without descending into the kind of melodrama so common in the goth/rock genre. The song straightforwardly encapsulates all that the album has to offer as exemplified by later tracks like “Waiting for a Sign” awash in wah-wah harmonies and howling chorus leads, “Armageddon’s Sideshow” hooking the listener with the refrains of “How long?” making for a memorable chant amid angular guitar lines that almost seem to compete with Nyte’s vocals for dominance, and the new tougher, more biting and aggressive version of Volumes single “The Reaping,” guest drummer Robin Diaz and Thwaite playing with the space between rhythms and riffs to achieve a more venomous and assaulting rendition of the song. On a similar note, “Everything Undone” is an almost mechanical industrial/rocker with its insistent synths and overdriven beats, the guitars and cold pads adding a touch of menace as Nyte’s voice seems trapped between pleading for escape and warning against an approaching monstrosity, while the background roars of Burton C. Bell appears on “Dystopia” to give the blackened and chilly atmosphere a touch of metal edge, perfectly meshing with Nyte’s slightly raspy croon and Thwaite’s virulent guitars. “Every Little Dream” is the album’s second single and a little reminiscent of Modern English’s “Melt with You,” its bouncy and catchy ambience evoking a slight hint of a sun struggling to shine through grey skies. Nyte’s harmonies in the chorus are sublime, giving the single that right hint of pop flavor.

But before you start to think that Gemini Nyte is just an unrelenting dark rock onslaught, rest assured that the band knows how to let the atmospheres breathe, with “Say Hello Wave Goodbye” prancing along with some pulsating synths and light drum machine handclaps that belie the almost operatic grandeur of the chorus as Nyte’s interplay of low and high octaves amid dancing guitar lines and angelic pads make for a pleasant ballad. Similarly, “Trading Faces” is almost hymnal as trickles of guitar and synth move like raindrops upon one’s face, the crystalline acoustic guitar and ambient waves of feedback and delay effects giving the song a cold, almost seafaring feel, and though “The Assembly Line” almost seems like a ghostly lullaby with its slow electro beat and strumming acoustic guitar setting a gloomy mood in tandem with Nyte’s grim vocals, the chorus bashes the door down with thrusts of distortion, crying leads, and Ferguson’s drumming. Another notable track is the slow burning “Tear the Sun” with its fluid guitar lines and pounds of piano chords and skittering synth effects, as well as “Hide Your Secret,” which has a soaring, semi-bluesy, almost classic post-punk feel akin to The Cult. A cover of Stone Temple Pilots’ “Atlanta” ends Gemini Nyte on a meditative, almost bouncy note with an homage to the late Scott Weiland, Nyte singing sweetly but sullenly as the song builds with sparse percussion and succulent guitar leads that never quite explode to keep things in a delightfully pensive mood. The digital edition includes a pair of bonus tracks, with Joe Haze’s remix of “The Reaping” giving the song an insidious industrial ambience, while “Love Action (I Believe in Love),” in this writer’s opinion, really should be a single on its own as it’s a great in-your-face rocker with a nicely rhythmic, almost rap like section in the bridge.

For over three decades, Thwaite’s musical prowess has seen him work with some of the biggest names in goth and industrial music; couple that with Nyte’s own distinguished career as a formidable singer and “Big Paul” Ferguson’s own thunderous stamp (…or perhaps that should be stomp), and hearing traces of the likes of Gary Numan, Killing Joke, The Mission, or Peter Murphy scattered throughout Gemini Nyte would be all but inescapable. Like on Volumes, all these influences coalesce into a cohesive musical package on Gemini Nyte that almost makes the record and its accompanying singles – which on the most recent outing includes remixes of “The Assembly Line” and “All the Broken Things” by members of The Cure Pearl Thompson and Lol Tolhurst, respectively – a celebration of the goth/rock genre as a whole.