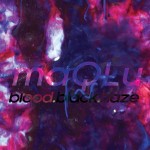 Reaching out from Vancouver like a black nail-polished fist from the abyss, the female solo project MaQlu released its first full-length album in 2011. The 16-track Blood.Black.Haze is a crash course in MaQlu’s work up to this point, encompassing the first three EPs. Occupying its own dark corner of the industrial realm, MaQlu may appeal to fans of the first generation of post-punk industrial and proto-electro (Severed Heads, Throbbing Gristle, Chris & Cosey, Suicide) as well as fans of more recent contributors (Add N to X, early Ladytron, ADULT).

The draw of MaQlu is definitely not high-fidelity audio or state-of-the-art sequencing arpeggios; it is the analog attitude and pioneering spirit of producer/performer Pyra Draculea. She seems to have more than a few tricks up her sleeve and a fresh and original approach to drum programming, like on the Devo-esque “Snare” and the dirty confessions of lust in “Trouble Thing.” The vocals are distorted and dispassionate. MaQlu toys with each word like a cat with a dead bird on “Siamese Twins.” Similarly, most of the song structures seem to be pulled back and forth through disjointed chords and tempo changes by the whimsy of their puppeteer. The funeral horns of “Martyr” give the track a demented cabaret vibe, like a misfit striptease parading itself down Bourbon Street. Like an evil ice queen, MaQlu likes to reel you in with tasty little morsels of enjoyable lo-fi electro. But as soon as you start to get comfortable with the beat, it gets taken away like a toy from a bad child. “Writhe” has a sleazy beat that tiptoes around as tiny megaphone vocals unleash demands on the listener. The track “Whore” gives us cheesey sounding Casio synth-bells to think about, accompanied by spoken words that sound like an indecypherable child’s poem. “Dream Come True” and “Move Through Me” have a sexy yet sinister arrangement that seems at times sarcastic, almost like she is dumbing it down for someone of inferior intelligence. The track “Home” takes the listener carelessly through a haunted maze of crunchy drums that skip around through different time signatures, over operatic organs that turn left and right through droning chords. An upbeat bass drum marks the begining of “March On,” but instead of techno style synths, this almost danceable track uses accordians. Her voice sounds more precise and succinct on this track, although it still hides a little too much in the mix. “Paws Off” stands out for its aggressive beat over sampled soundbites, like a frenzied three minute drum solo overtop of looping clips from a self-help book on tape.

The album is varied enough to not outwear its welcome; however, the tiny megaphone vocals do become tiresome by the time you reach the end. You’re never really sure if she wants to sound that way intentionally, or if all she had was a cheap microphone to record the vocals. The unique beats and song structures make a promise of future greatness. Ideally, MaQlu will be able to expand and evolve her craft and production technique without losing any of the playfulness that makes the music so appealling.