Machines of Living Death – The Dos of War0 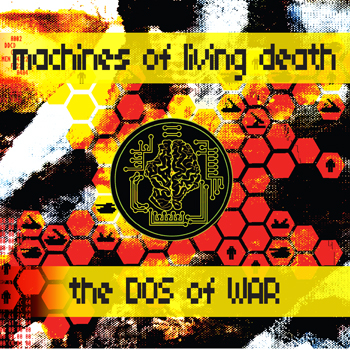 Machines of Living Death
Category: Metal / Industrial / Drum & Bass
Album: The Dos of War
Stars: 4
Blurb: As confrontational, provocative, and offensive as ever, the cybernetic fury of this Baltimore industrial/metal band is refined and upgraded to marvelous effect on this sophomore album.

Blending extreme metal with abrasive electronics may not seem like a huge leap nowadays; technology has found its way into virtually ever form of music, despite the best laid plans of puritan attitudes to keep rock, metal, punk, etc. free from the conveniences of machines and maintain the human spirit. Well, those people should steer clear of Baltimore’s Machines of Living Death, a band that has successfully integrated the cold precision of technology into a blistering extreme metal sound the likes of which is sure to sear one’s flesh off. While the band’s debut album, EOF(29A) presented this sound quite forcefully, it suffered slightly from its rather short length along with an impenetrable production sound that, while effective, made it difficult for listeners to fully embrace the nuances of the M.O.L.D. sound. With vocalist Whiplash joining the band for the Re:boot.20.11 EP, steps were clearly being taken by the band to improve on these shortcomings and create a no less incendiary but hopefully more dynamic mix. Now, with The Dos of War, M.O.L.D. showcases the results of their stylistic upgrades.

From the onset of “Code War,” the listener is jacked into a viciously distorted program of mechanized metal, full of all the guttural riffs and pummeling blastbeats metalheads could hope for, but augmented by industrialized breakbeats and seething electronics, some even created via the guitar, further blurring the lines between man and machine, perfect for the rivetheads. Some songs exemplify M.O.L.D.’s penchant for horror aesthetics like “Graveminds” with its slow, menacing pace and ambient passages of sustained pads and guitars along with the fluid, almost malfunctioning electronics of “Chromosexuality,” both of which also feature some disturbing vocal effects that add to their nightmarish effects. Other songs like “Vertebreaker” and especially “Screambit” and “Byte Supremacy” call back to EOF(29A), while “H.A.P.P.I.” is almost whimsical with its playful electronics kicking us into a barrage of overdriven rhythms and lyrics conveyed like a propaganda speech at a pseudo-political rally a la The Great Dictator. Themes of cybernetic sexual deviancy, obscenity, and isolation are on full display in tracks like “Robotica,” “Chromosexuality,” and “Pervertigo,” while “Byte Supremacy” is provocative in its exploration of the blasphemous undertones of a revived Christ through artificial intelligence. And then there are the anthemic chants of “In rage we trust” that pervade “Artificial Insanity,” making for one of the album’s most memorable tracks, and perhaps a theme that best describes M.O.L.D.’s modus operandi, complete with some infectious riffs that are sure to stay burned into one’s mental hard drive long after the album is over.

Throughout The Dos of War, it is apparent that Machines of Living Death has done well to maintain the elements of the band’s sound that defined the debut album – GazzMask’s layers of machine gun riffs and lightning fast solos are as prevalent as ever, but with the improved production are more easily distinguished, all the while set against the controlled chaos of Zombot’s driving percussion and powerful drumbeats. Whiplash’s vocals take on a gruffer, growling quality than on the Re:boot.20.11 EP, more in line with traditional extreme metal, but losing none of the clarity so that ever word bites and insinuates its way into the listener’s psyche like a computer virus sneaking its way into your core system. New member 4Star’s bass works well to complement both the guitars and the electronics, adding just the appropriate amount of low end and depth without oppressing the mix. Every element of the group’s music shows great refinement and advancement, from the production to the confrontational lyrics to the band’s overall sense of craft and musicianship as songs are allowed to breathe and build on their atmospheres rather than attack and end as on the preceding album. Well done, M.O.L.D.!