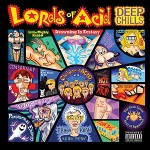 Having spent the better part of a decade in relative hibernation, the electrosexual techno assault of Lords of Acid has made a rather victorious return to the limelight. Beginning with the 2010 Sextreme Ball tour, and then the Little Mighty Rabbit and Pop that Tooshie EPs, Praga Khan and company have been offering a veritable tease for what is to come (no pun intended). With Deep Chills, fans of the band’s fervent mix of pulsating pornography and eclectic electro can finally stop biting their nails in anticipation and begin biting their lips in ecstatic release. As evidenced by the songs featured on the preceding EPs, Lords of Acid has done little to change its tune; as irreverently erotic as ever, Deep Chills is 14 tracks of pure musical kink touching on virtually every form of electronic music.

The album is off to a shady start as four of the first five tracks were already featured on the teaser EPs, with “Little Mighty Rabbit” beginning the proceedings with its gritty warbles and snarky rhythms to set the stage with its tales in celebration of vibrators, DJ Mea fulfilling the role of lead vocalist brilliantly. From the acidic synth and guitar loops of “Drowning in Ecstasy” evoking the menacing attitude of Voodoo-U while the rolling bass and cheesy synth leads of “Pop that Tooshie,” featuring adult performer Alana Evans on vocals, are sure to remind listeners of Our Little Secret, one might be inclined from the first few tracks to believe that Lords of Acid had run out of musical tricks, opting to rely on the lascivious lyrics. But then “Slip ‘n Slide” and “The Love Bus” enter with jangling guitars and booming beats akin to a ‘60s go-go dancer’s wet dream, while “Surfin’ Hedgehog” plays as a surf rock ode to Ron Jeremy. As well, “Censorship Blows” begins slow and ominous before bursting into a fanatically danceable track, the lyrics taking on a more sociopolitical mentality befitting the song’s title. And then there is “Paranormal Activity” with its bouncy hip-hop cadence, the vocal harmonization adding a layer of haunting intrigue before the song alternates into a vicious dub/rock assault akin to Paul Oakenfold scoring a sex party.

Lords of Acid has always been about freedom of sexual expression and chemical experimentation, and Deep Chills is no different with lyrics touching on fetishes as diverse as female ejaculation to drag queens to foot fetishes. In so many ways, it is the consummate Lords of Acid album, making one wonder what took the band so long to produce something that, while still sounding modern, could have been produced prior to their hiatus. Even with the forays into surf rock and hip-hop amid the band’s already liberal use of acid and house techno and industrial, Lords of Acid could have perhaps placed greater emphasis on these different sounds by omitting one of the earlier tracks featured on the EPs. Then again, to expect any different would seem foolish when considering the rest of the band’s oeuvre, making Deep Chills an effective return for Lords of Acid and providing fans of sleazy electro another excellent soundtrack to fulfill all of their kinky fantasies.