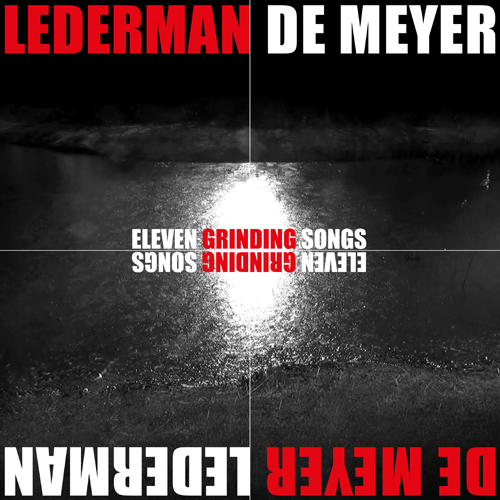 Lederman / De Meyer
Category: Electro / EBM / Experimental
Album: Eleven Grinding Songs
Blurb: With nothing to prove and no need to reinvent the wheels they helped to invent in the first place, these two Belgian icons of modern electronic music have crafted a rather straightforward and enjoyable record.

Whenever two legendary musical figures embark on a new partnership, there is always a myriad of expectations from the audience that the new collaborative effort will equal if not surpass the quality of the musicians’ past works. That’s a lot of baggage for an artist to carry, especially for artists like keyboardist/producer Jean-Marc Lederman and vocalist Jean-Luc De Meyer – two pioneers of modern electronic music, both having forged their own individual paths. In Lederman / De Meyer, these two Belgian titans certainly bring their respective strengths to cull from a rich history in the underground electronic scene, with the appropriately titled Eleven Grinding Songs as the duo’s debut.

Throughout the record, simplicity and minimalism play a key role in these 11 compositions, starting off with the pensive and somewhat ominous opener “Atoms in Fury.” Building from a jazzy beat and subtly rising swells of synthesized orchestral bombast, topped off by De Meyer’s familiar gravelly voice, the listener is brought to a perturbed state that resonates until the record’s final track. Tension ebbs and flows with songs like “I Wish We Could I Hope We Will” and “Run Ahriman Run” firing on all cylinders with rapid fire techno sequences and urgent beats that evoke a cinematic chase scene or the manic levels of a video game, while the self-referential and sardonic lyrics of “Flowers and Birds and Bees” and “A Tribe of My Own,” set to some old-school EBM rhythms and accompanying pianos, trumpets, and other seemingly organic elements are sure to provoke a satirical smile. And then there are the quieter moments like “Heartbeat,” as the cold and steady pulse of synth evokes an EKG without actually mimicking one, De Meyer’s lyrics somehow reminiscent of what one might hear on a C-Tec record, while Lederman’s programming skills shine on the discordant and almost dissonant “Dots, Circles, and Lines” as layers of analog synths sound almost off-key and on the verge of collapse to create an abstract but rhythmic track. Did I use the word jazzy earlier? Because that would also apply to “Tout Me Fait Rire” with its swinging rhythm and electronic sparkles creating the impression of an EBM/lounge hybrid, perfect for a nightclub romp, leaving “The Revenant” to close out the album with sparse beats and dark atmospheres that burst into a shrill factory-like mélange of mechanical distortion.

Deluxe editions of Eleven Grinding Songs include an additional 11 tracks, mostly comprised of remixes and instrumentals, but with five more original tracks. Among them, “A Cold Report” stands out with its cosmic and dreamy ambient passages creating a foreboding vibe once the vocals kick in, gritty at first, then switching to a darkly romantic feel, and although the bouncy, almost hip-hop beats and vocals of “State of the Nation” might be off-putting to some, it adds to the sense of creative enjoyment that permeates through every track Lederman and De Meyer have crafted. As to be expected, one will detect traces of Fad Gadget, The Weathermen, and any of Lederman’s other works in the instrumentals while De Meyer’s voice is so iconic in the industrial/EBM scene that it would be impossible to not hear bits of Front 242, Cobalt 60, C-Tec, etc. in his delivery. These are two musicians with nothing to prove, no need to reinvent the wheels they themselves helped to invent in the first place; no, this is Lederman and De Meyer reveling simply in their skills and clearly having a bit of fun, making Eleven Grinding Songs just that… a fun listen.