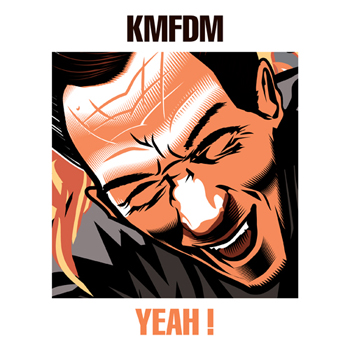 KMFDM
Category: Industrial / Rock
Album: YEAH! EP
Blurb: The Ultra Heavy Beat returns with an anthemic and celebratory powder keg of an EP that signals heavier things to come from the upcoming full-length album, with Lord of the Lost joining the party.

Having signed to earMusic in 2016 after a long association with Metropolis Records, the Ultra Heavy Beat sensation that is KMFDM unleashes the YEAH! EP as the first taste of new things to come from the band’s upcoming full-length album. With over three decades of history as one of the pioneering entities in industrial/rock, Sascha “Käpt’n K” Konietzko once again delivers his trademark assault of thunderous bass heavy beats, pulsating electronics, and lyrics that range from sociopolitical diatribes to self-referential satire, with “Hell Yeah” standing as a defiant and celebratory anthem for those who revel in “Spitting in the reaper’s eye.” Annabella Asia and Mika Harms introduce us with a brief message of unity that kicks the song off with the sort of aplomb and bombast fans have come to expect and adore; with Lord of the Lost’s Chris Harms trading off guitar licks with longtime band member Jules Hodgson amid Konietzko’s powerfully sharpened electronics and bass and catchy lyrical hooks, “Hell Yeah” is a signature KMFDM track that is sure to become a fan favorite. The edit version that ends the EP is appropriately shorter and a tad bit punchier, while Harms offers up a Lord of the Lost version that transforms the song into his own grandiose style, full of orchestral pomp and swagger; put simply, it’s an excellent interpretation. From here, YEAH! also gives us an edit of “Freak Flag,” on which Lucia Cifarelli takes center stage with alluring viciousness that along with the trancelike electronics and techno beats, reminds this writer of “Sex on the Flag” with a decidedly modern flair. Drummer Andy Selway brings his usual punk/rock power on the track, with Konietzko interjecting with a rhythmic vocal that makes it a little bouncier, even a bit poppy. Finally, there is the new version of “ATTAK,” totally recreated with only the lyrics and few electronics bearing resemblance to the original 2002 version that signaled KMFDM’s return after the “breakup” of ’99; with Harms’ guitars creating a distorted battering ram amid beats that assault the speakers like an industrial piston, “ATTAK 2017” is a fresh reinterpretation of an old favorite that may hint at further surprises in store. Some continue to disparage KMFDM as an act that simply fails to live up to its former glory, while others continue to lament the absence of past associates; to them, this writer says “Get over it already!” Konietzko has nothing to prove, remaining at the top of his game as a producer and musician, while he and his contingent of musical collaborators carry the mantle of KMFDM with great fervor. The YEAH! EP hits with all the industrial/rock force that anybody could want from the Ultra Heavy Beat, giving us some “good old fashioned Hell Yeah!” to keep the audience rocking until the release of the full-length album later this year.