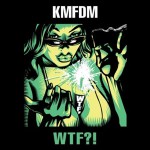 KMFDM
Category: Industrial
Album: WTF?!
Stars: 3.5
Blurb: Aside from some nuances of production and sound, WTF?! is KMFDM by-the-numbers… and that’s not a bad thing.

There comes a point in the progress of a band’s career when the evolutionary imperative slows to a lull, the fuel to the experimental fire starts to run dry, and all audiences can hope for from said band is work of some level of quality consistent with the best already offered. After all, when one has been making music for a considerable length of time and has already churned out at least a handful of albums that have earned the status or label of masterpiece, one can’t truly expect to maintain that level of excellence perpetually. Fortunately, KMFDM is a band that has managed to do so over the course of 27 years thanks to constant shifts in lineup personnel and/or dynamic, incorporating new styles and techniques, all the while staying true to an aesthetic and creative philosophy established since its inception. With WTF?!, KMFDM gives fans another hard-hitting dose of industrial rock that is as familiar as it is unusual, sounding unlike any album the band has released but still possessing that signature Ultra-Heavy Beat.

The music on WTF?! is certainly recognizable as KMFDM as the signature blend of industrial rock with various other styles is ever present. “KRANK” begins the album with a slow buildup of heavy beats and synthesized atmosphere that explodes into industrialized dance fury, presented in a much more engaging and powerful version than the single version. Indeed, some songs are almost too recognizable as certain elements are reminiscent of past releases, which is par for the course for KMFDM. Obvious examples include a synth refrain on “Come On – Go Off” sounding remarkably similar to “Bait and Switch,” while “Take It Like a Man” bears a strong resemblance to “Strut” from the previous album. Similarly, just as “A Hole in the Wall” was an English translation of “Liebeslied,” “Panzerfaust” revisits the lyrics, this time in Italian, which is exemplary of KMFDM’s recent exploration of a new language on each subsequent album since Hau Ruck. Among the more exceptional musical moments on WTF?! is “Lynchmob” with its guitar and synth assault in the chorus sounding extraordinarily punchy, along with some contemplative piano and guitar ambience in the verses, while “Dystopia” evokes the short-lived MDFMK project as Lucia’s voice takes an eerie and alluring tone before a powerful chorus, the overall effect making for one of the band’s most melodic tracks. Ending the album is “The Death & Burial of C.R.,” a nightmarish soundscape of pitch-bent pianos and heavily manipulated vocal layers based on an English nursery rhyme, not unlike the hidden track on XTort, though far more sonically experimental.

Just as KRANK was the band’s first single release in nine years, WTF?! offers listeners perhaps the most diverse lineup of guest performances since 2002’s ATTAK. Koichi Fukuda of Static-X lends his guitar skills to “Come On – Go Off,” a song that is sure to be a crowd pleaser in live performances, while the vocal interplay between Lucia Cifarelli and Kidneythieves’ Free Dominguez on “Take It Like a Man” balancing toughness and femininity gives the song – and the band – an added depth and dimension reminiscent of the days when Dorona Alberti and Christine Siewart were regular collaborators. As well, Sebastian Komor offers his programming skills to the caustic and raw atmosphere of “Rebels in Kontrol” and the highly danceable “Amnesia,” while longtime associate Bill Rieflin appears to provide some chatter and shivers on “Dystopia.” As he did on “Day of Light,” William Wilson of Legion Within brings a sinister and almost malevolent vocal ambience to “Spectre,” helping to emphasize the song’s thunderous industrial percussion and politically horrific subject matter.

KMFDM fans are among the most devoted and most opinionated in any music scene, with many denouncing the band for continuing well past its arguable prime, while others continue to support and follow over with each new release. WTF?! is an album that will likely do little to mend this divide, but it can’t be denied that KMFDM has succeeded in maintaining consistency of excellent production and continuity of style and content. Some of the album’s nuances call for repeated listening in order to truly appreciate them, while still not devoid of elements that are instantly appealing. In short, it’s KMFDM by-the-numbers, and after 27 years, that’s not a bad thing at all.