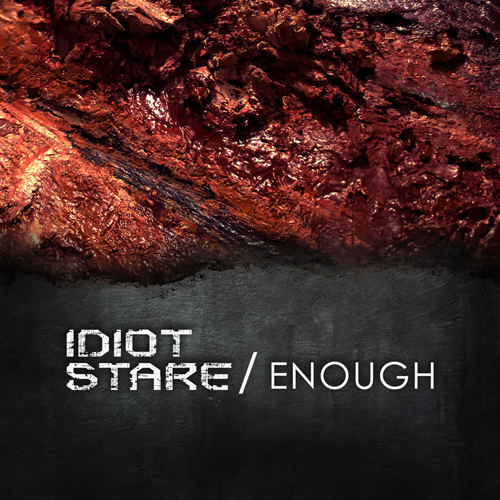 Idiot Stare
Category: Industrial / Rock / Goth
Album: Enough
Blurb: Having lost its front man in 2015, Idiot Stare presents one final offering that is as much a lament as it is a celebration of the band’s singularly diverse brand of “Industrial Goth Rock Noise Fuck.”

The death of a band mate, especially the front man, is never an easy ordeal, but in May of 2015 with the passing of Blayne Alexander, Los Angeles industrial/rock act Idiot Stare was dealt a devastating blow. Now, after three years, the band has released what may turn out to be its final offering, Enough. Featuring lyrics and some of Alexander’s vocals, Enough is as much a tribute by the band members to their fallen comrade as it is a lament and a celebration of their past, each track resonating with Idiot Stare’s trademark self-effacement, satire, and irony.

Thrusting rhythms in a 5/4 time signature topped off by oppressive guitars and electronic noise permeate the album’s opener “The Watcher,” the vocals guttural and almost obscured by the distorted instrumental menace. The song sets the tone for Enough with its roars of “I know what’s right, but make it wrong,” immediately placing the listener in a headspace of both defiance and despair, which is only accentuated by the chants of “This is not okay” and “The silence” in the closing track “Into the Dirt.” By the time we reach this song’s forceful punches of percussive frenzy, steely bass, and shrill guitars, and lyrics about death and loss, along with the piano-laden requiem of “Sucker Punch,” the band has all but declared its own farewell in bombastic fashion. There are tracks like “Unsub” with its bouncy synth leads and slithering cadences, “Witness” with its sustained guitar and synth leads amid darkly ambient passages and sparse rhythms, and the whiplash electro/punk of “I, Survivor,” its descending keyboard refrains adding a touch of whimsy to an otherwise acerbic and bleak song about survivor’s guilt. “Black as Pitch” is notable for its inclusion of vocals Alexander recorded in 2007, and between his sardonic delivery and the scorching guitars and synths underscored by aggressive drumming, this writer can’t help but feel that despite the band’s statement that the song didn’t fit on any past albums, it indeed would’ve been a good complement to the opening track on 2006’s Welcome to Babylon. Also notable is “Ghost People,” refurbished from a demo originally intended for Idiot Stare offshoot STG, its rubbery electronics and strident guitar effects standing out on the album without sounding terribly out of place, while “IGRNF” (“Industrial Goth Rock Noise Fuck”) stands as both ironic affirmation and bitter refusal of Idiot Stare’s place in a fractured music scene. One could argue that any cover of The BeeGees’ “Stayin’ Alive” is not to be taken too seriously given the song’s legacy, but the straightforward and industrialized manner in which the band performs the track along with its placement on the album somehow taps into the boldness and somberness of the lyrics.

Idiot Stare was always a band that would revel in and revile the scene of which it was ostensibly a part of, brandishing elements of the contemporary with the classic to create a sound that was something all its own. Even without the death of a virulent and vibrant front man as Blayne Alexander, the loss of so singular a musical entity would be a cause for remorse. As well, with Idiot Stare persevering through every pitfall one could imagine for an underground band since the mid ‘90s, one could hardly fault the group for finally deciding to call it a day – Enough most certainly is enough, and what a swansong it is as it presents all that defined the sound and style of Idiot Stare.