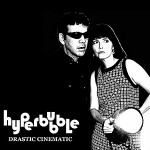 It’s one thing to compose a score to a nonexistent film, to build a musical arrangement around a narrative concept that exists only in the realm of pure imagination and sell the complexity of this concept through sound. It’s a task altogether different and more difficult to allow this music a chance to exist on its own merit, to be at once a score to one nonexistent film and all of them. The creative duo of Jeff and Jess Barnett DeCuir succeed in delivering just that and Drastic Cinematic is not defined by the band’s vision of avant-garde sci-fi but whatever vision the listener wishes to conjure in his or her own mind.

Growing out of Hyperbubble’s commitment to retro expressed through glitchy synthpop and a nostalgic use of visual and fashion motifs derived from the decade previous to this one, Drastic Cinematic at every step attempts to position itself alongside movie scores of the ’70s and ’80s. The music is filled with rhythmical beeps and evocative of ever changing tensions in its fictional narrative backbone. Despite being steeped in the notion of free, accidental experimentation where sounds are allowed to run amok, the album feels coherent from start to finish. Tracks like “Blame It on the Bot” and “Quiet on the Set” share similar diversity in the range of different beats and effects that clamorously come to arrange their form. From fragments of dialogue through intrusive distortions to obnoxiously cinephiliac use of the Wilhelm Scream, Hyperbubble playfully employs an impressive array of tricks to create, paradoxically, extremely simplistic appeal. To this effect, “Midnight Cruiser” is a perfect accompaniment to whatever film you’d like to imagine playing in your head – in equal parts inviting associations with cheap thrills of Italian giallo or a low budget sci-fi. The song’s uncomplicated nature allows a depth of connections with iconic cinematic moments that transcend the lines of dialogue that open the track. Although a mysterious female voice, through a wall of rain drops, rushes an unknown man to get into a car, the listener is not entrapped within this setting. Unlike classic electronic acts occupied with film scores like Tangerine Dream, Hyperbubble is not constrained by the necessity to remain committed to one mood or a singular theme. Drastic Cinematic shifts pleasantly between its affinity with film and pop and beyond. “Vox Noir” employs haunting vocals in a manner of a classic, gothic mystery and the brief “Rue Des Dames” consists of subtle ambient elements and background chatter that creates a feeling of unease as if listener was caught during an act of obnoxious voyeurism. The album is closed by “Welcome to Infinity,” split into two, drastically different parts. Part 1, like the earlier “Geometry,” is very much a standalone pop song that spins cheerfully around an effective hook despite the sparse use of vocals. Only few elements of that track carry over to Part 2 that through orchestral elements and majestic, leisured tempo bookends the entire experience.

This deluxe release – appropriately christened as a “director’s cut” – offers three additional remixes that, sadly, fail to prolong the brief, core experience. Two versions of “Welcome to Infinity” and Haberdashery’s take on “Geometry,” like the originals, play with delicate sounds and pulsating beats but in a more straightforward way that seems to limit the creative flux that filled the rest of the album. On Drastic Cinematic, Hyperbubble are engineers of imagination; their music is not assigned to one rigorous vision but created to induce a multitude of images. Some of them are reinforced more than others – the band itself strongly insists on Francophone chatter and noir inspired themes – but there’s a place for all of them and Hyperbubble’s latest is a triumph of simplicity in the service of entertainment and affection.