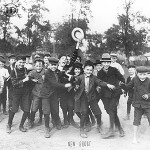 Hate Dept.
Category: Post-Punk / Industrial
Album: New Ghost
Stars: 4.5
Blurb: 10 years later, and Hate Dept. are back and sounding as fresh and as virulent as ever, with Seibold and company delivering an album of finely abrasive industrialized rock & roll.

After a decade long wait of unavailable songs and rumors, along with a well received appearance at the 2012 ColdWaves tribute to Jamie Duffy, Steven Seibold finally stood up from the producer’s chair and called a meeting of the other executives of the Hate Dept. – guitarist Nick Meade, bassist Jae Stevens, and drummer Matthew Z. Belcher. The result is the band’s fifth album, New Ghost, an appropriately and ironically titled album that signals the return of one of the industrial rock underground’s most beloved acts.

As the lyrics state in opening track “Disconnector,” “This is hate, nothing new,” no better statement could better exemplify the album’s sound and power. From the juxtaposition of pure post-punk rock hooks and squelching industrialized synths, topped off by Seibold’s ever melodic and abrasive vocals, this is Hate Dept. giving audiences the same sound the band has become known for. From the scathing melancholy of “New Son Army,” the soft synth-laden catchiness of the verses giving way to an explosively raucous chorus along with some dubstep leads in the song’s later portion, or the danceable groove of songs like the darkly electronic “Matrimonial Blood” and especially “Broken Rule,” the interplay of the synth melody and the chugging guitars on the latter making for a catchy track, or the slow menace of “Subordinates” with its thrumming bass and shimmering guitar leads, New Ghost is Hate Dept. at its best. “Amanda Jones” stands out for its slow pace and beautifully despairing tone, driven by layers of synthesizer leads, while Little has changed in the band’s sound, other than the production is just a tad more polished, but where Hate Dept. has always shined is in the songwriting and the excellent integration of industrialized electronics with straightforward rock & roll.

The long wait has been well worth it as Seibold and company deliver what is sure to be remembered as a Hate Dept. classic, offering up all the elements of the band’s sound that fans have come to love since the early ‘90s. New Ghost is anything but new, but with each song presenting a virulent and vibrant brand of coldwave, Hate Dept. sounds as fresh and as relevant as ever, making this fifth album not only one of Hate Dept.’s best overall, but perhaps one of the best releases of 2013.