Hands of Ruin – Empire and Dust1 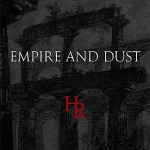 Hands of Ruin
Category: Ambient / Neo-Classical
Album: Empire and Dust
Stars: 3
Blurb: The new album from Colin Z. Richardson’s moniker Hands of Ruin is a soundtrack tailor made for conquering the world, but the album falls short at the city gates.

At first listen, Hands of Ruin’s first full-length offering is a stunning glimpse into the world of neo-classical music. The album begins with a bang (literally) with the aptly titled track “Against the Gods.” The song combines pulsating percussion and subdued string elements before building up to what could be likened to an all out battle cry. Similar elements can be found throughout the record, particularly in later cuts “To Rise Like Smoke” and “Incense on the Altar.” Initially, the pattern for these songs works. Its sound is so grandiose and bombastic; it conjures images of raising an army and marching on anything in its path.

Before long though, the album begins to lose its edge. Some of the elements that make the album sound so fresh in powerful in the beginning start to feel like a burden throughout the second half of the record. The structure of the songs begins to become slightly redundant halfway through. Broad, sweeping crescendos only retain their dramatic power if used sparingly, a rule which Empire and Dust does not abide by. However, the introduction of different instrumentation, such as the slinking strings found on “In a Bitter Sea” and the pluck bass and bells on “We End as Dust” helps to lessen the monotony of nearly every song featuring the same format.

Another shortcoming is the tribal sounding percussion that persists throughout the entire album, which rarely grants the listener relief from the jarring pounding. A good majority of the songs on this record would certainly benefit from the use of dynamics when pertaining to the percussive elements. The term “a little goes a long way” comes to mind as what should be the modus operandi for the next Hands of Ruin Release. Also, the mix of the album is of no help to the percussion. In areas, the drums are so overbearing that it completely renders the song immobile, crushed under the weight of its own might. It isn’t until the last song of the record where the percussion is toned down immensely. The result is the track “Against Nature,” which is a wonderful atmospheric track that truly showcases what Hands of Ruin are capable of.

Overall, Empire and Dust is a decent collection of neo-classical music. Despite the several missteps along the way, there is reason to believe that Hands of Ruin will entrench itself as an integral part of the neo-classical landscape. Fans of this style of music should definitely check out this record and wait with bated breath to see how the next one shakes out.