Grendel – Age of the Disposable Body0 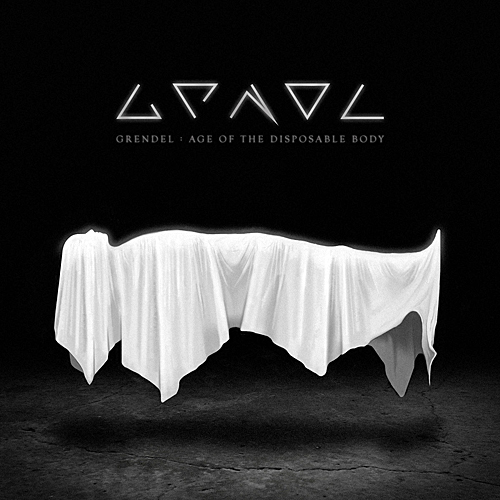 Grendel
Category: Electro / Industrial / EBM
Album: Age of the Disposable Body
Blurb: Grendel takes a few years off to soak up political turmoil and return with a more focused album that pushes the band creatively into a higher level of quality.

Over the past 17 years, JD Tucker has been making improvements in his songwriting and performance style. On earlier albums, he produced perfectly serviceable aggrotech with whispered vocals and didn’t go too far beyond the trappings of aggressive EBM style beats and euro hardstyle synths, eventually improving upon them on later releases. The production was better, the melodies were more complex, and the vocals went from whispered to being sung, although they were still being run through a standard aggrotech style vocal filter that flattened everything, which makes the vocals throughout the entire genre rather interchangeable. Another aspect to these earlier albums were sci-fi themes with light social commentary. Grendel’s 2012 album Timewave Zero concluded with the track “Fall” and the spoken lines, “The disposability of products and people… thousands of people are alive today only because they carry inside of them, electronic devices — plastic bugs, the era of the disposable body.” In this context, this writer would understand the term “disposable body” to take the sci-fi meaning of replaceable bodies or body parts. In the five years between Timewave Zero and Age of the Disposable Body, that term would seem to take on a different meaning.

Age of the Disposable Body opens with “Magnum Opus,” another spoken word piece, this time quoting Aleister Crowley’s The Book of The Law, with orchestration that mirrors “Fall” that concluded the previous album. Lyrically, “Magnum Opus” talks about how all the types of government of the world are eroding away individuality and free expression in favor of a herd mentality. The theme continues with the opening song “Severed Nations,” the lyrics about keeping countries down through economic means with lines like “golden chains and fiscal restraints,” while “Fall Like Rome” is very much as its title suggest. In the title track “AOTDB,” it would seem this idea of swappable bodies or body parts has morphed into the idea that nations with the capacity to do something about the injustices of the world simply ignore them, indicating that people themselves are disposable. It would seem the turmoil that Europe and the rest of the world has gone through in the past few years has informed Tucker’s output to the point that the themes are no longer sci-fi. While bringing modern politics into one’s lyrics can be risky, it has mostly paid off on this record. All but the most diehard fans would have a hard time telling you what most Grendel songs are about, let alone albums; most of the tracks were lyrically vague with an emphasis on style over substance. Age of the Disposable Body seems like a laser focused effort that places a great deal of meaning into the words. But that can be a double-edged sword. For instance, a track like “Flux” would purport that the cycles of fear, anger, and hate every “50 to 100 years,” but this almost feels like clickbait. It’s an interesting theory without evidence to back it up, but this writer admits that he may be overthinking it, that the song is meant as a thought piece and that it’s the listener’s job to research the idea. But the idea itself is enough to give pause and cause one to question the topics of the rest of the album. But perhaps that’s the point.

Tucker uses his standard palette of rhythmic trance stabs, pulsing bass, danceable beats, with just a touch of guitar, but his arrangements feel more thought out. He manages to all of his technical skills and fit them into a chorus/verse/chorus structure to make each song more memorable. The album is packed with melody and Tucker succeeds at creating catchy choruses on almost every track, with enough of the filters removed from his voice that you can really hear them. It is surprising that it took Tucker this long to put himself out there like this, and the music is stronger for it. Although there are no filler tracks on the album, there are some questionable sound choices. Sometimes it sounds like Tucker is using instruments other than synths, such as acoustic guitar, saxophone, and even an orchestra, and they all sound convincing enough. But then, there are sounds that are clearly a synth imitating real instruments like a violin or accordion, and they are so synthetic in tone that one must question if any of the instrumentation was organic at all. While most of the tracks are danceable, one can tell that Tucker put more effort into making the track “Scorn” dance floor ready as it feels more beat oriented with the vocals completely enveloped in vocoders to render them part of the background. During what would be the chorus is a high end descending synth line with extra guitar to make it hit harder, which results in “Scorn” sounding much like a Prodigy track.

The deluxe edition of the album comes with additional remixes from artists such as Ludovico Technique, Assemblage 23, and Panic Lift. Most of the remixes keep the vocals untouched and just rework the music and while they are well done, none stand out in comparison to the original versions. However, there are a few remixes that change the genre enough that you could slip a Grendel track into a set where the band wouldn’t normally fit. For instance, Alpha Quadrant manages to turn “Flux” into a full on ‘80s retro style duet, Plastic Noise Experience remixes “Severed Nations” into something resembling gothic electro-funk, and Panic Lift remixes “Far Away” into a melodic dubstep track. The only track that really doesn’t work is the Spitmask remix of “Hex It,” on which the vocals are replaced with distorted screams underscored by a repetitive loop throughout the entire track, making it very monotonous.

While it’s not perfect, Age of the Disposable Body is a solid effort and a marked improvement in Grendel’s overall aesthetic. The politics of the lyrics can come off as a little questionable, but they give Tucker a focal point to channel his energy and breate some life into the music.