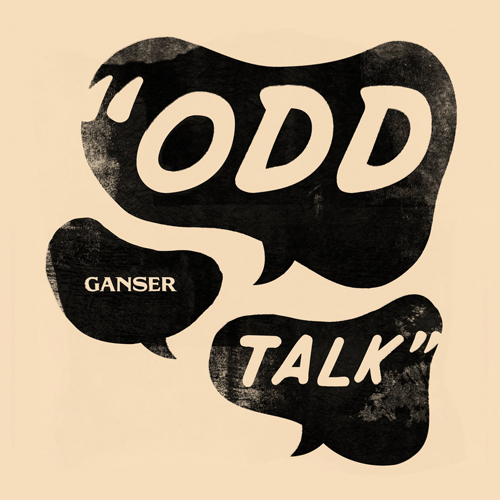 Ganser
Category: Post-Punk / Coldwave
Album: Odd Talk
Blurb: A peculiar mix of styles that ranges from jazzy urban grooves to anxious punk with a dose of electronics to create a sound that is very much the Chicago quartet’s own.

Ganser syndrome is described as a psychiatric dissociative disorder characterized by the individual attempting to mimic psychosis despite not actually suffering from it. Long debated in the psychiatric community, the condition provides an appropriate name for this Chicago quartet, a band whose music could be categorized as an amalgam of punk and indie rock with touches of electronic accompaniment, yet somehow defies the conventions of those genres; add to that a high dose of energetic performance in and out of the studio, and Ganser is a band with a sound all its own, with Odd Talk being the group’s latest album.

“Comet” begins the album with the sound of a ringtone backed by an ominous splashing of electronic effects and indistinct voices giving way to a strident bass and drum line, scrapes and scratches of guitar, and spoken vocals creating an air of tension and mystery. From here, Ganser runs the listener through a gauntlet of manic mood swings, from the post-punk rockers of “Satsuma” and “Avoidance,” with their powerful bass and drum grooves and chainsaw guitar lines underscored by minimally vibrant keyboards, to the almost jazzy audio noir of “Marsh,” a track so sultry one can almost smell the cigarettes, regret, and shame emanating from the speakers. Similarly, the sparkling piano lines and hoarse guitars of “Aubergine” create a vibe not dissimilar to Dummy-era Portishead, the track building up from a somber beginning to a virulent explosion of dark energies and emotions, while the dreamy melodies and sustained guitar distortion of “Touch Insensitive” recalls the post-grunge shoegazing sounds of Lush or Slowdive. And then there are the spastic punk assaults of “PSY OPS” and “YES NO,” both bursting with atonal chord progressions and urgent rhythms perfect to get the audience riled up.

The interplay among the band members is particularly noteworthy, with bassist Alicia Gaines and keyboardist Nadia Garofalo exchanging vocals to provide a range of emotive deliveries that in tandem with the eccentric nature of the music creates a remarkable effect throughout Odd Talk. The rhythm section of Gaines’ bass and drummer Brian Cundiff is second-to-none, acting as the introspective brooding that stands in contrast to the nervous energy of Garofalo’s varied keyboards and Charlie Landsman lively guitars. Odd Talk certainly lives up to its title, presenting Ganser’s vigorously peculiar music with great aplomb; in short, this Chicago band is one to watch out for.