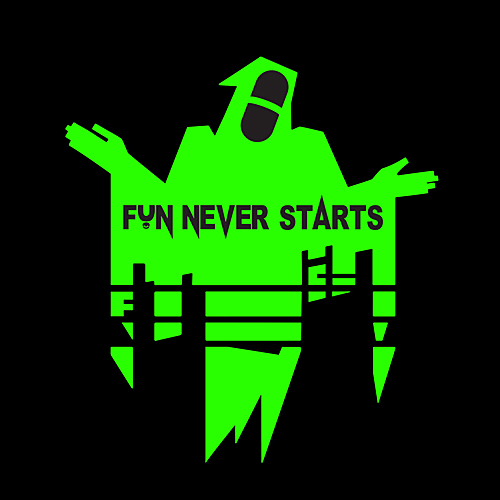 Fun Never Starts
Category: Electro / Industrial
Album: Nothing’s Good Ever
Blurb: Let’s get serious here, because while the production could use some finessing, this sophomore release from Baltimore’s Fun Never Starts is indeed some serious fun.

There’s a particular appeal to a band of musicians willing to allow an irreverent sense of humor to stand in equal measure with artistic expression, striking that delicate balance that accentuates rather than impedes creativity. Taking its cues from the likes of the Revolting Cocks and Caustic, Baltimore’s Fun Never Starts has been carving out its own niche with this approach, with the Nothing’s Good Ever EP being the group’s second release.

One need only read the liner notes or look at the song titles to see the band’s humor on full display, but while Fun Never Starts may not commit the sin of taking itself too seriously, the music is not to be dismissed as mere trifle or flippant indulgence. The thunderous beats and distorted bass lines of “Dollar Store Witches” and “Lupine,” both coupled with resonant synth leads, evoke a ghostly and atmosphere that suits the EP’s Halloween release date. But the real star of these songs is Gashius Clay’s breathy and even bluesy “low lady scream” vocal performance, which is reminiscent of Alison Moyet during her tenuse with Yazoo and shows a sharp command of melody with a hint of restraint, never flying off the handle and keeping the song in a state of caution and tension. Alas, while the distortion effects lend to the music’s decidedly industrial percussive ambience, they do at times reduce the voice to an emotive hum wherein the words are difficult for the ear to decipher (thankfully, the lyrics are available via Bandcamp). The same can be said of “Bidet of the Dead,” although the vocals do become a bit unhinged at times, sometimes subtly harmonizing and eventually relenting to a brief but primal screech to give it a rather eerie quality that almost puts this writer in mind of the creepier moments of My Life with the Thrill Kill Kult, the pulsating electronics and repeating “You’re fucked” sample indicative of the band’s WaxTrax! influences. On the other hand, the frivolous toilet humor in Peanu Reeves’ rapping vocals on “180 Proof of the Afterlife,” complete with spooky theremin-esque synths, make the song a perfectly horny Halloween party anthem. In the same vein is “Golden Calf Corral,” on which this writer can’t help but be reminded of Screamin’ Jay Hawkins’ during Reeves’ delicious and blasphemous verses, Clay’s more soulful chorus offsetting them lest the song descend too far into derisively festive abandon.

As a sophomore release, Nothing’s Good Ever has all the signs of a band comfortable with its identity, while still striving to apply that right amount of production polish to make the music shine. If nothing else, the band’s sense of ironic humor is on full display because listening to Nothing’s Good Ever, you know the fun truly has started.