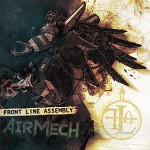 Never ones to shy away from a challenge or an interesting project, Front Line Assembly has teamed up with indie game development studio Carbon Games to produce a soundtrack for the free-to-play twitchy real time strategy game, AirMech. Leeb and co. last worked in the realm of video game soundtracks for the 1999 video game Quake III: Arena, and similar to that effort, AirMech is a lyric-less, sample-less exercise in atmosphere and tone that boils Front Line Assembly down to its core elements while still leaving room for a few new surprises.

The title track sets the mood well with its bombastic percussion, deep synths, and symphonic chords introducing the epic scale for which the music reaches. “Arise” follows with its strong beat and playful synth suggesting an aura of technological awe and reverence for these future machines of war. With “Pulse Charge” and in later tracks such as “Everything That Was Before,” Front Line Assembly surprisingly works in dubstep influences, but manage to use them effectively and naturally without compromising the band’s own style. There are plenty of signature Front Line Assembly soundscapes to be found with tracks like “Burning Skyline” and “Stealth Mech” sounding like they easily could have been reworked to fit alongside pieces from Improvised Electronic Device. While most of the tracks work well outside of the context for which they were originally written, not everything gets by outside of the game. “Prep for Combat,” for example, is clearly designed as an incidental background track, but was flushed out to seven minutes of nothing terribly interesting that can easily be perpetually looped.