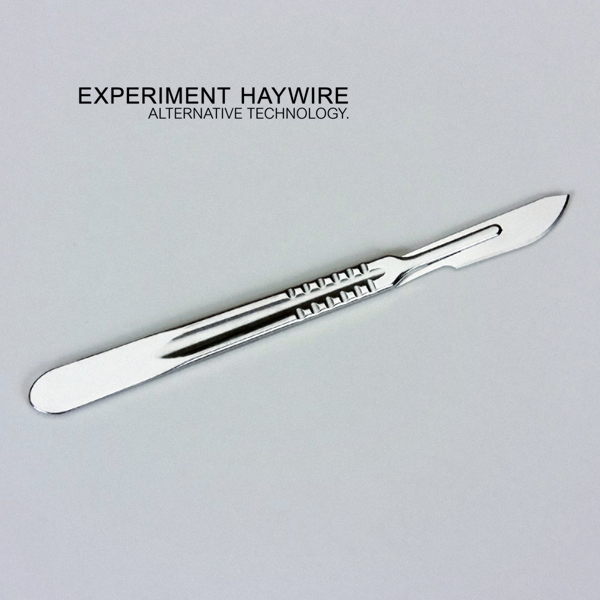 Since first appearing in 2005, Rachel Haywire’s musical output has been wrought with transhumanist and sociopolitical themes set to a decidedly raw and unfiltered punklike aesthetic that along with some of her more outspoken views has made her a notoriously polarizing figure in the electro/industrial scene. Although she has remained an active figure as an author and event organizer, it has been eight years since the release of her Blacklist 23 collection, making for quite a lengthy musical absence. Joining forces with Sebastian Ivo Hartmann of Wertstahl, Experiment Haywire now returns with Alternative Technology, which true to her confrontational nature is sure to turn a few heads for its lyrical aggression as much for its stylistic intrigue.

Although melody hadn’t been completely absent from her past output, it was never a primary component of Haywire’s past material, which constituted noisier and more abrasive sounds that on occasion bordered on unlistenable. Although these ingredients remain part of her palette, the opening title track immediately presents a sleeker, and dare I say more polished songwriting sensibility that is actually rather catchy and owes much to the current trends of retrowave. This is especially true in the anthemic chorus as pulsating synth arpeggios are coupled with strident pads that recall the best moments of the futurepop era, and while Haywire’s vocal approach continues to eschew tunefulness in favor of shouts and spoken word, her rhythmic delivery and the occasional vocoder effect ensure that phrases like “Hello users” and the song’s title are sure to get stuck in more than a few listeners’ heads despite themselves. The guttural bass lines and breakbeats of “New World Order Show,” along with the scathing and metallic beats and synths of “Will to Glamour,” and the pounding EBM passages of “Cool Hunter” and “Reality is Dead (Virtually)” prove that Haywire still has her feet firmly planted in harsh industrial and noise, but once again tempered by Hartmann’s distinct sense of attack in the mix, each sonic element shining brightly. Other tracks like “Autist,” “Silent Voices (Butterfly),” and “New Empire” incorporate some rather bouncy synth leads that are sure to appease the synthwave crowd, the latter track concluding the album in a somewhat circuitous manner as its major-key chorus and ironic lyrics recall those of the opening track.

Speaking of the lyrics, the proliferation of new technologies and their integration into virtually every facet of human experience has been at the core of Experiment Haywire’s manifesto. “Blacklists” seems to be a sardonic yet almost celebratory reflection on Haywire’s own past controversies, or in a broader sense the quelling of individualism and dissent as the repetitions of “freaks among the freaks” and “banned from every platform” seem rather palpable in the current climate of social media. Similarly, the infectiously danceable “Optimized” is somewhat witty in its composition of phrases and buzzwords common to internet startups, business pitches, and millennial health kicks (“Have you tried the keto diet? Have you tried yoga?”), while the acerbic bite of “Cool Hunter” in its outright criticism of trendiness and social acceptance is quintessentially Experiment Haywire. Also featured is a cover of Grimes’ late 2018 single “We Appreciate Power,” presented in Haywire’s own heavily electro/punk style as the guttural guitars and robotic pop melodies of the original are taken over by saccharine pads and beats, the lyrics exhibiting a greater resonance with the themes of Alternative Technology over the original artist’s more sporadic and haphazard output.

While the tenets of her sound remain intact to a fault, it’s fair to say that Alternative Technology is Rachel Haywire’s most focused effort; the lyrics all coalesce into an overarching diatribe on the current state of society, while Sebastian I. Hartmann’s production and musical arrangements make for a crisply unified blend of EBM, synthwave, and industrial. Even as some will still find her vocal style to be repellent if not infuriating, Haywire does well to refine her approach without sacrificing her unapologetically provocative nature, making for a better incorporation of her words with the music. Alternative Technology is certainly not the most revelatory or groundbreaking artistic statement, but for what it’s worth, it’s arguably the best that Experiment Haywire has sounded.