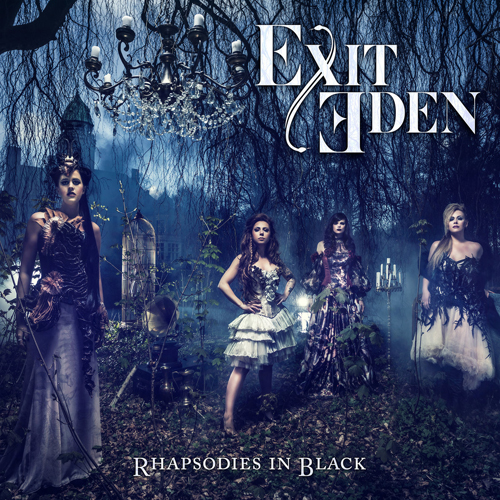 Exit Eden
Category: Symphonic Metal
Album: Rhapsodies in Black
Blurb: Exit Eden sets out to prove that even the most saccharine pop ballads can be reworked into metal masterpieces.

The album opens with Depeche Mode’s “Question of Time,” replacing the classic synths of the opening riff with a flute, which sets the tone for a very symphonic recreation of the tune. Somerville is the prominent lead, but the other vocalists are introduced throughout the song to showcase the unique variation of their vocal ranges and styles. The version of Rhianna’s “Unfaithful” ups the tempo from the slower, stripped down original and adds a healthy dose of heavily distorted guitars to create a much heartier version of the song. Simone Simons of Epica drops in to lend her vocals on the rendition of Madonna’s “Frozen,” the featured strings creating layers of depth lacking in the original version. Lady Gaga’s “Paparazzi” takes on the vibe of an ‘80s metal power ballad with speeding guitar solos and dark staccato symphonics peppered into the verses. No pop cover album would be complete without a nod to one of the most ridiculously cheesy songs of all time – Bonnie Tyler’s “Total Eclipse of the Heart.” It’s hard to beat the urgency in Tyler’s original vocals (and also to forget the feathered mullets and scenes of dancing ninjas from the music video), but Exit Eden manages to create a polished, yet still over-the-top cover version that is right up there with the original.

Overall, Exit Eden achieves its goal of taking classic pop songs and transforming them into hard rocking, symphonic, and operatic metal songs. The vocals are indeed stellar and it’s interesting to hear each singer featured and take the lead in different parts throughout the songs. The production quality and instrumentation are solid. With all of that said, this writer isn’t much of a modern pop fan, so while the artists covered on the album are all familiar to me, some of the songs being covered were not, so the appreciation for knowing the original and hearing it for the first time as a metal ballad was lost on me. While the talent of the singers and musicians on this album are absolutely appreciated, this particular operatic/fantasy style of metal rings a bit cheesy and corny, but then again, so are the original songs being covered. Maybe… just maybe that is what makes this whole project a whole lot of fun.