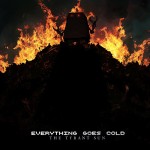 Everything Goes Cold
Category: Industrial / Rock / Electro
Album: Tyrant Sun
Stars: 3.5
Blurb: Among the new heroes of modern industrial rock, Everything Goes Cold gives fans something to ease the pain of waiting for a new album and pulls a few great surprises along the way.

After several years and two high profile releases with Sonic Mainline and BitRiot Records, Eric Gottesman has finally made a home for his industrial rock outlet Everything Goes Cold with Metropolis Records. For his first release with the renowned label, Gottesman offers the Tyrant Sun EP, containing four brand new tracks and several remixes, making for an effective teaser for bigger things to come. Already known for his acerbic wit and scathingly distorted brand of industrial rock, Tyrant Sun is in no shortage of attitude and aggression, yet exhibits the band in transition toward a more varied though no less stimulating sound.

These variations make themselves known right off the bat with the introductory “Solaris,” presenting a frigid soundscape of wind and arctic ambience befitting the band’s moniker. An icy piano melody shimmers as a throaty down-pitched voice provides a somber narration that does little to prepare the listener for the onslaught that is “The Iron Fist of Just Destruction.” Beginning with a pulsating synth arpeggio that suddenly explodes into a pounding industrial rock track driven by James Webb’s raging guitars and Gottesman’s signature vocal rasps singing of apocalypse and decay, the song is all that fans could want from Everything Goes Cold. I:Scintilla’s Brittany Bindrim offers a soaring backup vocal that along with the crisp production elevates the song to epic heights. Among the remixes of the song, Aesthetic Perfection’s Going Hard remix quite predictably transforms the track into a sharp dance floor killer typical of their own style, notable mainly for the manner in which Gottesman’s voice resounds even more cleanly and clearly than on the original version. On the other hand, the Cosmic Cubanate remix by Be My Enemy toys with the structure of the song, adding whole new guitar progressions and vocal effects and harmonization, almost effectively making it a new song unto itself, while Alter der Ruine’s remix – humorously titled the John Stamos of Remixes remix – opts for a lighter, more electro version with chip-tune synths and glitch effects. Of the other new tracks, “King of the Impossible” offers an infectious helping of the more cold ambience and drum & bass, the vocals taking on a sullen tonality that along with the edgy guitars in the chorus makes for perhaps one of the band’s best songs yet in this writer’s opinion. The remix by DJ? Acucrack and Cyanotic’s Sean Payne slows the pace but amps up the energy with a vicious assault of dubstep glitches and warbles. As well, “EBM/OGS” keeps with Everything Goes Cold’s sense of humor as almost a commentary of its own genre, easily sounding like an updated version of a Nitzer Ebb or Front 242 B-side from the ‘80s, complete with dialogue samples that only serve to enhance the joke.

Tyrant Sun even ties into the band’s past with Uberbyte’s Ray Gun remix of “Monsters of the Modern Age” and the Single Density demo of “Retry,” both of whose original versions were featured on the preceding album, Vs. General Failure. As such, the EP provides an appropriate bridge between the unbridled rage and caustic energy of the past and the cleaner, more melodic, though no less virulent sound Gottesman and company are hinting at with these new songs. As stated in the liner notes, “Everything Goes Cold will return with a new full-length album when the time is right,” but until that time, Tyrant Sun will do more than enough to sate the fan’s palate for Everything Goes Cold.