Everything Goes Cold – Black Out the Sun0 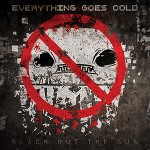 Everything Goes Cold
Category: Industrial / Electro / Rock
Album: Black Out the Sun
Stars: 4
Blurb: Pursuing a much more varied and melodic path withouot sacrificing the hallmarks that defined the band’s sound, the latest from this modern coldwave act shows Everything Goes Cold at the top of its game.

While his past outings with this modern coldwave oddity demonstrated a propensity for humorous flippancy akin to his fellow acts in the Sonic Mainline family, Eric Gottesman brings Everything Goes Cold into a new level of musical maturity with Black Out the Sun, the band’s first full-length album in five years. The previous release, 2012’s Tyrant Sun EP, showcased a band in the midst of a transition, continuing to push its acerbic attitude and aggressive wittiness into a new, more varied style of industrial rock; with Black Out the Sun, that transition is complete as Gottesman and his cohorts deliver the signature EGC sound with a greatly refined sense of production and sonic craftsmanship.

Black Out the Sun does well to retain the elements so intrinsic to the sound of Everything Goes Cold; namely synth sounds reminiscent of 8-bit video games topped off by crunching guitars and Gottesman’s acidic wails. However, while past releases were not without their moments of melody, this album presents them in a far more forceful manner that becomes especially evident in the anthemic choruses of tracks like “Henchman Follows Hand,” “IAMERROR,” and “The Joke.” It is on this latter track that the truest indications of Everything Goes Cold’s musical fury are brought to the fore as a tense and oddly organic drumbeat underscores James Webb’s choppy guitar, with Gottesman layering his vocals somewhere between nervous harmony and vicious shouts. The combination is disconcerting to the uninitiated, but it is part of EGC’s unique signature and quickly makes its strength and presence known to the listener. The same can be said of a track like “The Iron Fist of Just Destruction,” presented here in a more rhythmic, equally abrasive, yet more enticing version from its Tyrant Sun original, with the addition of a tasteful vocoder in the song’s second verse and I:Scintilla’s Brittany Bindrim offering her own velvet-yet-venom vocal accompaniment. Similarly, Valerie Gentile’s guest vocal on “Serpent Crown” lends an undertone of soft melancholia to the other glitch-laden and sardonic track, while “When the Sky Rips in Two You Are Free” bursts with discordant synth arpeggios in the verses. Making a return from Vs. General Failure is “Ice Brigade, Part II” on which Gottesman shows his mettle with a bombastic epic that would easily make VNV Nation or even Laibach take notice as layers of strings and electronic waves build in tension, the thunder of distant drums and a gradually fading choir staying on the periphery of explosion. “Conqueror” ends the album along the same lines with an almost medieval melody by way of more 8-bit synths, bringing to mind something out of The Legend of Zelda or Final Fantasy, the vocals shouting and growling in monstrous victory, but it is “All Sculpt Evil from the Clay Beneath Their Lips” that really shines as the album’s penultimate track as ghostly ambience and chilled pads underscore fritters and squelches of synth and scraping guitars, Gottesman’s voice at the peak of its cacophonous power.

To say that Black Out the Sun might very well be the finest display of substance-plus-style that Everything Goes Cold has yet produced would be putting it mildly. All of the hallmarks established by the band are present, but now relegated to serving the much improved songwriting rather than driving it, making for a much more dynamic direction that this writer sincerely hopes will be pursued further by EGC. With the legendary Wade Alin lending his own production prowess to the album, Black Out the Sun finds Everything Goes Cold returning at the top of its game.