ErilaZ – Black God of the Hunt0 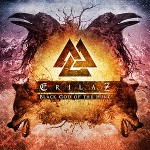 ErilaZ
Category: Industrial / Metal / EBM
Album: Black God of the Hunt
Stars: 3
Blurb: Familiar and classic in its juxtaposition of ancient folklore and modern production, the debut from this Finnish act is powerful and enjoyable enough, but struggles to retain an identity of its own.

Striving to merge the percussive and guttural fury of industrial/metal with the pulse and the energy of electro/EBM, topped off with arrangements indicative a more orchestral pomp mindset, Finland’s ErilaZ presents something of a quandary with his debut full-length album, Black God of the Hunt. Indeed with its very album title, as well as with the lyrical approach, ErilaZ touts an anti-modernist theme throughout his music, focusing more on the ancient natural worlds of Northern Europe. And yet, the musical style is simultaneously familiar, classic, while also forward thinking and distinctly modern. This is immediately apparent in the opening track, “Legacy” as energetic lines of techno-inspired EBM and drumbeats give way to a furious procession of guitars, instilling urges to dance and bang one’s head. Yet with the washes of symphonic ambience by way of strings and echoes of an operatic female voice fading into the background, ErilaZ’s scathing growl turning into an impassioned melodic wail, the song is as much the kind of journey he hopes to take the listener on throughout the whole of Black God of the Hunt. From the monotonic thrust of “New World Order” given weight with progressions of glitch and somber piano infusing a classically gothic atmosphere, to the strutting rhythm of seething synths and guitars on “Kuolema Sinut Tänä Syksynä Korjaa,” and onto the layers of distant guitar arpeggios and electrified melodic EBM leading on “The Successor,” the album moves at a deliberate and very calculated pace, as if being guided down a path through a darkened forest in some classic folk tale. Yet, throughout these songs, and even on the rusty mechanical beat underscoring the sullen dirge of “Unknown Dark Horizons” or the breakneck tempos and forceful riffs and battle cry vocals of “Resurrection of Wotan” and “The Architect,” there is a prominently technological edge that grounds Black God of the Hunt very much in the now, as if to make its flirtations with nature and ancient mythology a mere reflection in a mirrored window. The only drawback is that it’s all too reminiscent of what we’ve heard before from the likes of Turmion Kätilöt or even In Strict Confidence, and while ErilaZ’s music stands on its own for its eclecticism and unbridled melodious power, Black God of the Hunt struggles to exist in a realm that can bring the same sense of wonder to listeners as ErilaZ’s influences undoubtedly brought to him. Still, it’s an album that revels in its sense of grandeur and majesty, making for an effectively powerful and enjoyable listen.