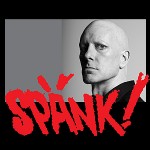 En Esch
Category: Industrial / Electro / Rock
Album: SPÄNK
Stars: 4
Blurb: Undeniably gritty and irresistibly catchy, this second solo outing from the industrial music icon is every bit as diverse and as enjoyable as one would expect from En Esch.

As one of industrial music’s most celebrated performers, En Esch is a man who should need no introduction; known for his work in such bands as KMFDM, Slick Idiot, Pigface, along with his collaborations with Mona Mur, FM Einheit, and having production and remix credits with numerous others. Now, after more than two decades since the release of Cheesy, En Esch offers fans his second solo album – funded by the fans via PledgeMusic, SPÄNK is everything one would expect from the enigmatic and eccentric musician… and then some.

Beginning with a fanfare of synthesized noise and kicking into an upbeat and rhythmic display of industrialized electro/rock, “12345” sets the stage for the album, marvelously. With onetime cohort Tim Skold providing accompaniment, the song is as infectious a dance floor rocker as one would expect from any of En Esch’s past outlets, making for an effective introduction into his sleazy musical world. Never one to restrict himself to one style, SPÄNK presents a cornucopia of sexually charged and electrified rock music, from the whimsical disco bounce of “Freedom of Mind” to the unbridled industrialized thrash of “We Love to Hate,” from the organ-laced acid lounge of his cover of GoFight’s “Give the People What They Want” to the noise-drenched dance floor fury of “No Gust No Glory.” Also notable is a song like “Soul to Steal,” possessing a quality akin to Curve as Trixie Reiss’ soulful melody is reminiscent of Toni Halliday while Esch’s signature rasp and roar atop the simple but catchy techno beats give the song the feel of DickNity era Slick Idiot. Similarly, tracks like “Do Me” or “Slickalicious” with Günter Schulz’s signature riffs and Erica Dilanjian’s aggressively smarmy backup vocals, or “Hard On” featuring More Machine Than Man’s Rob Zilla and Tasha Katrine could easily (and perhaps obviously) have been featured on any of Slick Idiot’s past releases, while “Ich Bit Bereit” stands out as particularly melodic and groovy with a darkly mood that would’ve fit rather well on Esch’s work with Mona Mur.

With more than a few guest collaborations from his retinue of past band mates and co-writers, SPÄNK is in many ways the consummate En Esch album as it culls from virtually all across his sonic palate. The results create a sound that is undeniably gritty and irresistibly catchy, with no small amount of his characteristically sardonic humor for good measure. While perhaps not the most cohesive listen from beginning to end given its assortment of styles and moods, the album functions well as a sampler of Esch’s talents across the board as a musician and a producer and is a far more enjoyable affair than Cheesy was 20 years ago. SPÄNK is one hell of a good time, and one hopes that En Esch will make good on his words on the closing track, “This Party Ain’t Over,” with more to come hopefully before too long.