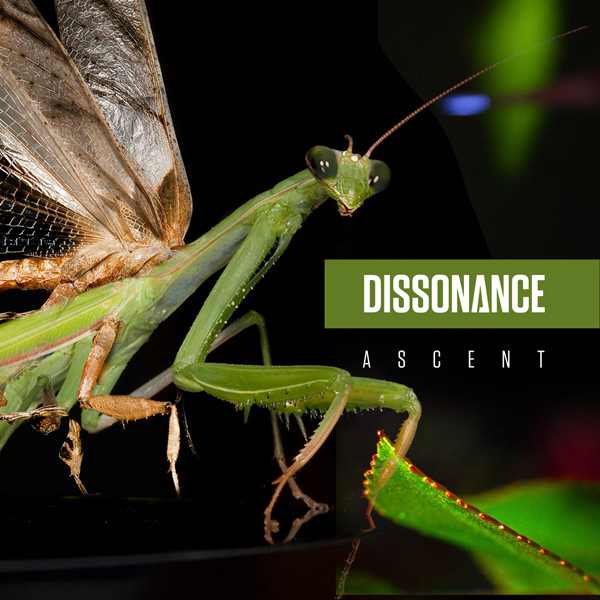 Dissonance
Category: Electro / Industrial / Darkwave
Album: Ascent EP
Blurb: An amalgam of all that has come before and a hint of what is yet to come, the latest EP from Dissonance is a long-awaited jewel of modern melodic electro/industrial.

Returning in 2017 after a long period of inactivity with the Void album, and then followed up by the “Sycamores” single in 2018, it seemed that Cat Hall was taking Dissonance further into a softer, more ambient realm. Seemingly gone were the energetic rhythms and abrasive textures of the band’s earlier works, although the newer releases were certainly not lacking in strong songwriting and production. But then, she turned right around to give us this latest EP under the Dissonance moniker; created in partnership with the inimitable Jim Marcus and featuring a number of established collaborators, Ascent presents not only a return to the harsher danceable electro/industrial sound that once defined Dissonance, but also incorporates aspects of the later material, making for a well rounded amalgam of all we’ve heard from the project.

The slow burn of “Break Myself” begins the proceedings, as seething layers of scratchy synths and guitars that seem to croon like a wolf at midnight sway to a leisurely beat, allowing Hall’s passionate vocal performance to take centerstage. The intensity rises to a climactic fever pitch as her harmonies deliver a striking chorus that would be sure to remain stuck in the listeners’ heads, if not for what the rest of the EP has in store. Throughout, Ascent runs through a gamut of moods and tonal colors, flowing effortlessly to paint a complete picture of what can be called Dissonance. Songs like the cover of Propaganda’s “Murder of Love” and “Poison Kiss” pay tribute to the band’s influences, with the latter being especially notable for featuring Information Society front man Kurt Larson; the similarities between his and Hall’s voice makes for a highly charged and harmonious dynamic that is such a joy to hear in action that one hopes for more from this collaboration. Those familiar with the band’s past will delight in hearing a song like “Taste,” on which original member David Sebrind injects his signature pulsating layers of distorted melody and grinding ambience, topped off by Hall’s assertive and glitch-laden voice. Slowing the pace down yet again, “Drive” presents a dreamily atmospheric sojourn through sparse yet sparkling electronics and coldly minimal pianos, Hall’s alluring vocal layers tantalizing the listener in a manner not dissimilar to “Sycamores.” And then, “Starstuff” brings things to a lively conclusion with shrill yet bubbly electronics and potent dance rhythms, while Hall’s undeniably infectious melodies will surely have many immediately singing along.

With the likes of Jon Van Herrmann, Chrys Anthem Wozniak, and Junior Kain also providing their own touches to the EP, Ascent is unquestioningly the most varied presentation we’ve yet heard from Dissonance; and yet, thanks to Hall’s lush and lovely vocals and Jim Marcus’ masterful production, the EP is both cohesive and poignant. Sure, some tracks like “Starstuff” and “Murder of Love” bear some resemblance to Marcus’ GoFight (with band mates Vince McAley and Dan Evans also lending their instrumental skills to the EP), but regardless, there is no doubt that this is Cat Hall’s show from start-to-finish as her skillful songwriting and her captivating voice are the very essence of Dissonance.