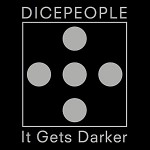 Dicepeople
Category: Electronic
Album: It Gets Darker
Stars: 4.5
Blurb: Darker and heavier, the aptly titled It Gets Darker from Dicepeople is a fantastic blend of classic electronic, EBM, and industrial into a danceable and engaging sophomore effort.

It Gets Darker is the second studio album from London based electronic act Dicepeople. Originally started by Matt Brock as a side project in the ‘90s, Dicepeople has been his main musical project since 2008. The theme of the project is “dark electronica for the body and mind,” and It Gets Darker is no exception. The album leans heavily on traditional dark motifs such as questions of power, corruption, and the role of the machine in humanity. Even upon a casual inspection, it is clear that this album is heavier than Time to Play, the first release from Dicepeople.

“One Sun” opens the album with a highly danceable, fast paced groove. The energy and relentless beats on this first track get the album off to a great start. “More” instantly brought KMFDM to mind with its strong synth driven melody and grimly intoned chant of “More sex, more drugs, more money, more power, more passion, more pain.” It is possibly the strongest track of the album for the coherence that Brock maintains as he pulls together layers and layers of sound and noise. It is the kind of song that you find yourself still dancing to long after the last notes have faded away. The album does a brief bend midway through with “Dangerous Game” where the heavy use of minor chords and whispered vocals create an almost menacing and threatening feel. “I’m a Machine,” while mostly instrumental, features a quote from the main antagonist of Battlestar Galactica against the sounds of hand drums echoing hollowly under a stark, eerie harmony. The words are well chosen and capture the future unknown vision of the album.

For a sophomore album, It Gets Darker simply shines as a stunning example of what innovative electronic music should be. The songs flow together with the consistency of a well crafted story and, despite being almost entirely instrumental, remain engaging and thoroughly enjoyable. With It Gets Darker, Dicepeople combines the best aspects of industrial and EBM and churns out an album that impresses upon the first listen.